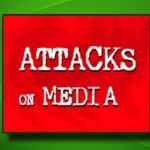 People protesting the execution of Mumtaz Qadri on Friday Pelted the Business Recorder House with stones and chanted slogans against the media organisation. The caused damage to one of the vehicles of the media house and threatened its personnel. The protesters were quoted as saying that “The media organisation gave ‘insufficient’ coverage to the funeral […]