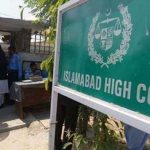 “The constitutional courts of Pakistan will not allow laws that guarantee the rights of the people, including freedom of expression to be violated,” Justice Athar Minallah said, adding that “whatever is happening in India, we won’t let it happen in Pakistan.” The IHC chief justice passed these remarks while hearing a contempt case on the controversial comments passed by different television channels after former prime minister Nawaz Sharif was bailed last year.

The court allowed the Council of Pakistan Newspapers Editors (CPNE) to file its reply in two weeks in the contempt case. The Geo Television Network’s Hamid Mir and other TV anchors, a representative of Pemra and IHC Journalists Association two presidents Amir Abbasi and Jahangir Aslam Baloch attended the proceedings.

Hamid Mir said though it was a contempt of court case, but wanted to refer this court’s (Islamabad High Court) detailed judgment about the National Accountability Bureau’s domain to arrest the criminals. He said the NAB officials violated the law and had arrested Jang-Geo group Editor-in-Chief Mir Shakil-ur-Rahman, adding that the NAB’s actions could be considered as contempt of court. The Chief Justice remarked that the court had given the detailed judgment in a separate case and Mir Shakil-ur-Rahman’s arrest could not pose contempt of court charges, saying that he had explained the term of reference of the NAB’s law.

Mir told the court that while Mir Shakil-ur-Rahman extended his full cooperation for investigation and asked if any alleged criminals cooperating in the investigation could not be detained. He said that the government has issued a notification to regulate the social media after the federal cabinet passed the Social Media Rules, but the government ministers told “us there was virtually not discussion on the bill at all”. Barrister Jahangir Jadoon told the court that their application is on process in the same court that directed the government to respond. He said the Pemra had ordered cable operators to change the Geo New positions. He prayed the court to take action over actions against freedom of media. The chief justice said the court doesn’t have suo motu powers.

Presidents of the two factions of IHC Journalists Association Aamir Abbasi and Jahangir Aslam also appeared before the court and submitted their written replies in the case. Aamir Abbasi said journalists are conducting self-accountability and the press club membership of non-journalists was terminated through scrutiny. Hamid Mir said question mark still hangs over the membership of 600 journalists.

The CPNE sought some time for submitting its reply in the court which was granted. The hearing of the case was adjourned for two weeks.