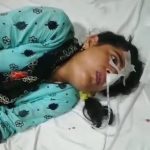 Sahiwal (Pakistan) November 8 (newsin.asia): She was breathing artificially in the ICU. Doctors were trying to save her life but some cameras knew she was having the last moments of her life, so they wanted to capture her for their “Breaking News”.

18 years old Anum was passionate about her work as a female journalist hailing from a village near Sahiwal. She had joined Centre News a web channel in the Sahiwal Division 2 years before. But appearing on TV made her life difficult as she faced the worst of trolling because of her appearance. There was family pressure too. She ended her life because of character assassination on social media. Her fiancé ended relationship because of her media profession. Her family does not want to face the media anymore as her mother believes, she lost her daughter because of her social appearance.

According to a biannual report issued by Twitter in December 2020, Pakistani authorities reported 3,004 Twitter accounts to the microblogging website for alleged offenses like “spreading hate material” and “inciting violence” in the first six months of 2018.

Last year the Pakistan Telecommunication Authority (PTA) had informed the Senate Standing Committee that while Facebook, YouTube, and other social media platforms had complied with requests from the government to block objectionable content, Twitter was not obliging. The government threatened to block the platform, after which it seems the company has given in.

Facebook is the largest use social medium in Pakistan. In South-East Punjab people have started Online FB pages linked to YouTube for entertainment and news about their areas. In Sahiwal almost 15+ FB and YouTube channels are working with youngsters to promote local news and talent. But unfortunately, no safety measures are being taken.