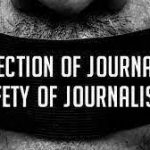 The Sindh Human Rights Defenders Network (SHRDN) has lauded the landmark legislation adopted by the provincial assembly to protect journalists.

The Sindh province has always been ahead in enacting pieces of legislation, be it on women’s rights, journalists or peasants. “We believe that the Sindh Protection of Journalists bill 2021 will help protect the journalists and put an end to the impunity for those who carried out attacks on the dissent,” said a statement issued here on Monday. It said this law and its implementation would also help address the grievances of families of journalists martyred while carrying out their work.

Hopefully, it will also address the justice needs of families of those journalists who have died during their work in Sindh since 1990. “We hope through the implementation of this law, Pakistan will improve its image at the international level. Freedom of expression is a universal human right and interconnected to other different important rights, i.e. the right to information etc.

“A free press is fundamental to a democratic society. It seeks out and circulates news, information, ideas, comment and opinion and holds those in authority to account. The press provides the platform for a multiplicity of voices to be heard.

“At the national, regional and local levels, it is the public’s watchdog. We urge other provinces to pass the same law for the protection of journalists. We also urge the Sindh government to pass a law on the protection of human rights defenders who are working for human rights promotion and protection in remote excluded areas of Sindh, i.e. from Karachi to Kashmore, from Jaccobabad to Mithi.”