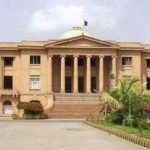 KARACHI: The Sindh High Court (SHC) on Thursday restrained the police from lodging more cases against a journalist without its permission.

The two-judge bench, headed by Justice Mohammad Iqbal Kalhoro, also directed the police not to harass the journalist and adjourned the matter till Jan 22.

Ajeeb Lakho, a Khairpur-based journalist, through his lawyer, moved the SHC seeking protection. He contended that police lodged 18 cases against him in Sukkur after he filed a news report against the Sukkur DIG for his alleged involvement in the smuggling of Iranian diesel.

The lawyer for petitioner, Aslam Bhutta, argued that the petitioner had managed to secure bail in all the cases and shifted to Karachi since the police were harassing him. He apprehended that police would lodge more cases against the journalist.