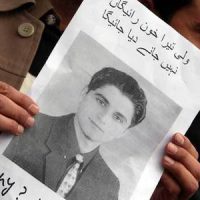 Sindh High Court (SHC) on Wednesday overturned the death sentence of Faisal Mehmood, alias Mota — the primary accused in the Wali Khan Babar case — and ordered a retrial by the lower courts.

The SHC was hearing an appeal filed by Faisal Mota, who was awarded a death sentence in absentia, by an anti-terrorism court (ATC) in Kandhkot in March 2014 for masterminding the 2011 murder of television journalist Wali Babar in Karachi.

Mota, said to be a worker of the Muttahida Qaumi Movement (MQM), was later arrested and detained in March 2015 in Karachi after Rangers conducted a raid at the MQM headquarters.

The advocate had also said that when a punishment is awarded in absentia, the convict must refer to the trial court according to Article 19(12). However, his client was unable to refer to the ATC in Kandhkot because the records of the case were at the SHC.

He had, therefore, requested the court to dismiss Mota’s death penalty and send the case for a retrial.

The ATC in Kandhkot will now hear the case from scratch again.

On January 13, 2011, GeoNews journalist Wali Khan Babar was going home from his office when he was shot dead in Liaquatabad, Karachi. Shocked by the murder, journalists across the country had protested and mourned his death, demanding the arrest and trial of the culprits.

Rajab Ali Bengali, a police informer, is stated to be the first victim, whose body was found in a sack on Jan 29, 2011, in Gulshan-i-Iqbal.

The second victim was Constable Asif Rafiq who was killed in a drive-by shooting by two men on a motorcycle on Jan 31, 2011. He had identified the vehicle the attackers had used. He was at the spot at the time of the murder and had noted down its registration number.

Head Constable Arshad Kundi is believed to be the third victim linked to the investigation. He was killed in a drive-by-shooting on March 19, 2011, in Sohrab Goth.

On April 7, 2011, a brother of the SHO of Super Market police station, Shafiq Tanoli, was shot dead. Tanoli told reporters that his brother, Naveed Khan, had been killed to pressurise him.