Home » Featured » Shahzeb Khanzada stands by his show on PTI’s Tareen, says will not apologise 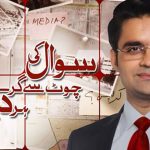 Anchorperson Shahzeb Khanzada, in reply to the Rs1 billion defamation notice sent to him by Pakistan Tehreek-i-Insaaf (PTI) leader Jahangir Tareen, said he stands by the statements made in his television programme which he claimed were substantiated by documents and news reports.
On Jan 25, Tareen had sent defamation notices worth Rs1 billion each to anchorpersons Khanzada and Waseem Badami for making “false imputations” in their news programmes, demanding that the anchorpersons withdraw their “defamatory imputations” and tender a “proper public apology” in their respective programmes as well as “publish a contradiction of the said defamatory statement(s).”
Yesterday, Khanzada while refusing to apologise for his statements, dedicated a portion of his programme to refute the claims made by Tareen in his notice.
“In his notice, Tareen has maintained that we did not bother to reach out to him or to invite him on the show to get his comments on the hike in sugar prices,” Khanzada said.
Outrightly denying the allegation, the ancherperson proceeded to show multiple screenshots purportedly of text messages exchanged between Tareen’s assistant and his team, where they had tried to invite the PTI leader to the show and also asked for his comments.
“Any time we do a show, we make it a point to reach out to the person or department in question so that we can get their views. We asked Tareen to come on the show multiple times and sent questions and messages to his assistant and his staff members.
“We even offered to send a camera crew to his location after his staff said he was unavailable, but our repeated requests went ignored,” Khanzada said, adding that the topic of the discussion had also been made abundantly clear to Tareen and his team.
“On Jan 28, we reached out to him once again to talk about the defamation notices and the hike in sugar prices. His staff replied that he is currently travelling and that you should contact the Pakistan Sugar Mills Association for further information.”
Khanzada said he will respond to the notice in court but that he had decided to air a response on his show because the defamation story had been picked up by media. “Because this has been picked up by the media, it is our responsibility to inform our viewers about the realities.”
According to Tareen’s notice, Khanzada in his programme Aaj Shahzeb Khanzada Kay Sath, which aired on Geo News on January 21, had given the impression that Tareen was part of a “sugar mafia” and was “collusively involved or complicit in causing artificial inflation” of refined sugar across the country.
Furthermore, the notice said, Khanzada had suggested that Tareen was “managing or deciding” the federal and provincial governments’ policies pertaining to the production, sales, import or export of refined sugar which had led to an increase in the commodity’s price. It was also implied that Tareen’s interest in the sugar industry was “obstructing the due regulation of sugar mills and the price of sugar” by authorities.
Tareen said he was not a part of the federal or provincial governments and therefore, could not influence the policy-making process. The PTI leader in his notice said he had “no nexus with or any authority over regulatory institutions” such as the Competition Commission of Pakistan.
In a separate notice sent to Badami, Tareen took exception to being referred to as “corrupt” in the anchorperson’s show 11th Hour, aired on ARY News on January 23. According to the notice, Badami had offered “no proof or evidence of the alleged corruption of or corrupt practice(s)” against Tareen.
Dawn.com has reached out to anchorperson Waseem Badami and awaits his response to the defamation notice.