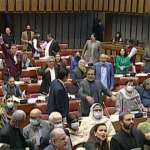 The upper house of parliament on Friday passed four bills, including the Protection of Journalists and Media Professionals Bill 2021 and the National Accountability Amendment Bill 2021, amidst protests from the opposition benches.

The development comes after the government managed in getting through a record number of 33 bills, including the controversial bill on electronic voting machines (EVMs) and I-voting for overseas Pakistanis, from the joint sitting of parliament on Wednesday despite facing resistance from the opposition.

However, Mazari pointed out that it took a year to draft the bill, saying voting to approve it should be conducted to avoid any further delay.

Both the bills were approved by the majority, while a six-member group led by Senator Dilawar Khan also voted in the government’s favour.

Agitated over the proceedings, the opposition surrounded the speaker’s dais, chanted slogans and tore up copies of the agenda. The session was later prorogued.

PPP Senator Sherry Rehman via Twitter lashed out at the government for being unwilling to listen to the opposition.

“What was left of parliament in the Senate was destroyed today when the treasury introduced a supplementary agenda at 12:35pm without laying bills and just called in members to bulldoze a NAB bill. From now on the Senate too will not run,” she said.

Rehman said that the government was unwilling to allow the provinces to “speak or breathe”.

According to her, the office of the leader of the opposition had been told all bills would go to respective standing committees but they were not sent.

Talking about the NAB bill, she said that it was presented after members had left for Friday prayers.

“Because friends in the media are asking: we did NOT oppose the journalist protection bill but were asking for it to go to a standing committee, same as what we wanted for all bills after the supplementary agenda was produced when members had left for Friday prayers,” she added.

Meanwhile, Mazari congratulated media persons on the passage of the journalist protection bill.

“Today, a two-year struggle to provide a comprehensive journalist and media professionals protection law, drafted in consultation with journalists’ bodies, was finally realised through parliament,” she said.

The minister said that President Arif Alvi will now sign the bill into law, and also thanked journalists and media professionals for “their valuable inputs and support”.

“The bill reflects these inputs,” she said, adding that it was drafted with consensus.

Information Minister Fawad Chaudhry also hailed the passage of bill, saying it was an expression of the government’s commitment towards journalistic freedom.

“Congratulations to working journalists. This bill will grant journalists rights that are only given to media professionals in highly developed societies,” the minister said in a tweet.

He also thanked Mazari for turning his idea for journalists’ protection into reality. He said the new law would pave the way in securing the lives of journalists.