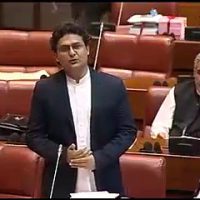 ISLAMABAD: The Senate Committee for Information and Broadcasting on Tuesday said the issue of unannounced media censorship and stoppage of Dawn media group circulation and transmission in cantonment board areas should be raised in the cabinet meeting.Senator Faisal Javed chaired the committee meeting attended by Senator Maula Bux Chandio and Senator Rubina Khalid.
The senators heard the viewpoint of President Pakistan Federal Union of Journalists (PFUJ) Afzal Butt and President Rawalpindi Islamabad Union of Journalists (RIUJ) Mubarak Zeb Khan about their concerns over the issue of censorship being faced by the electronic and print media.

Secretary Information Ahmed Nawaz Sukhera told the meeting that the Ministry of Information did not take any step that could result in restrictions on the media. He said the state-run TV was giving fair and equal coverage to all political parties. He said the caretaker government has given clear instructions to remain impartial during the general elections.

Afzal Butt said that in the past dictators regimes, news stories or photographs were often stopped from publishing through officers, but our credibility was affected. He said the pressure of current un announced censorship is on journalists and media houses, adding that political parties were raising objection over media coverage. He questioned why there are parallel laws and governments in our country. He said free and fair polls were not possible without independent media.

The chairman of the committee directed that the matter should be referred to the federal cabinet so that it could look into the situation.

Mubarak Zeb told the committee that distribution of Dawn newspaper was disrupted in certain areas and the committee should pass orders to rectify the situation. He said the media houses are being told which news is to be run and which news is to be stopped. Mubarak Zeb said stopping of Talat Hussain and Babar Sattar’s columns from publishing are solid proofs. He said distribution of Dawn newspaper has been barred in cantonment areas.

Senator Rubina Khalid said question has been raised on the fairness of the upcoming elections. Chairman Pakistan Electronic Media Regulatory Authority (Pemra) Saleem Baig informed the committee about the code of conduct issued to the media about coverage of elections. The committee decided to meet again in the first week of August to take up the issue of restrictions on media.