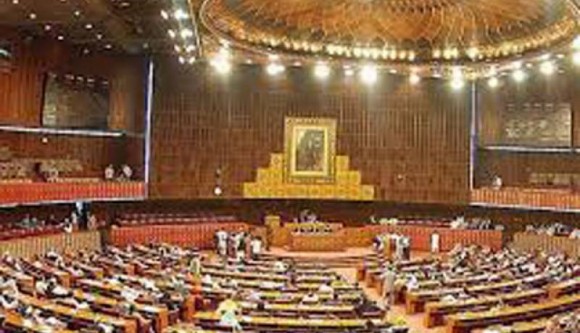 ISLAMABAD: Four years after the submission of a draft of “the journalists’ protection and welfare bill”, members of the Senate’s sub-committee on information, broadcasting and national heritage reached the conclusion on Monday that most of the proposals were irrelevant.

The bill was introduced by Prof Khurshid Ahmed and 21 other senators in Oct 2011 and referred to the standing committee by the House Business Advisory Committee in September this year.

Of the movers, 15 have retired after completing their six-year term as senator in 2012 and March this year.

Information Minister Pervaiz Rashid, Finance Minister Ishaq Dar, Leader of the House Raja Zafarul Haq and the sub-committee’s chief Mushahidullah Khan are also among the movers of the bill.

It suggests a number of steps to be taken by the government, such as providing special jackets and all allied facilities such as water, food and fuel to journalists during coverage, especially in emergency situations, in case of a national calamity, accident or natural disaster.

It proposes that journalists should be exempted from parking fee all over the country and get free medical treatment in government hospitals.

If a journalist feels threatened and needs protection, the SHO of the area shall provide the required security, the draft says.

“If any incident occurs in the limits of any police station and the SHO of the area is informed about the incident, the SHO shall be held responsible.”

It also suggests setting up a journalists’ social security fund and a national journalists’ council to recommend steps for their welfare.

Moreover, a controversial clause of the draft law is that the Supreme Court may ask about the source of information in case of a matter of ‘national security’.

Senator Mushahidullah said he had studied the bill and discussed it with media persons, and reached the conclusion that a number of proposals were within the purview of media houses.

“However, through the bill, responsibilities of the media houses have been diverted towards the government. Moreover, it is impossible for the government to implement some of the recommendations,” he said.

He suggested that media owners and their representative bodies should be invited to finalise the proposals.

The President of Pakistan Federal Union of Journalists (PFUJ), Afzal Butt, said although some of the recommendations could be the responsibility of media houses, only parliament could ensure their implementation.

“Majority of journalists even don’t have appointment letters. Salary is not paid in time and media houses have become no-go areas for the implementing agencies. So parliament should intervene,” he said.

Mr Butt alleged that officials of the information ministry tried to favour media owners instead of workers.

“While most of the media houses were making efforts to get banned the ‘Bol Group’, we requested the information minister to notify the wage board because it was a good opportunity and the media houses were not in a position to react. The minister agreed and instructed an official to bring the file but the official said that file had been misplaced,” he said.

Senator Zafarul Haq said that since terrorism was at its peak in 2011, a decision had been taken to make a law for protection and welfare of journalists.

“We had observed that although wage board awards were announced, they were not implemented. When I was information minister, I announced that advertisements would not be issued to those media house which did not have regular employees. A journalist wrote a column against the announcement,” he said.

He said since there was no mechanism to provide security to only one segment of society, the portion of welfare was also included in the bill.

Legal expert Aftab Alam, who was asked to submit his recommendations, said a United Nations Action Plan for Journalists’ Security was announced in 2012.

“Pakistan has endorsed the plan. So it is mandatory to do legislation for journalists’ security and that is why the old bill has again been taken up for discussion. In Pakistan, 119 journalists have been killed during the past 15 years. Of them, 60 were killed at point-blank range, but only two cases — of Daniel Pearl and Wali Babar — were decided. Even these cases have been stuck after the first phase of trial,” he said.