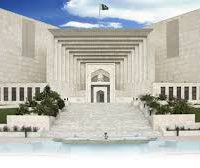 ISLAMABAD: Overt and covert censorship is unconstitutional and illegal, the Supreme Court ruled while deciding a suo motu notice relating to the Faizabad Interchange sit-in by Tehreek-e-Labbaik Pakistan (TLP).

“Nebulous tactics, such as issuing advice to self-censor, to suppress independent viewpoints, to project prescribed ones, to direct who should be hired or fired by media organisations is also illegal,” the judgement of the two-member bench, authored by Justice Qazi Faez Isa, said.

It said the Supreme Court has castigated those who had resorted to such tactics in the past. It had directed that there should be “no hindrance or obstruction” of TV broadcasts and the provincial police officers were directed to take action against the perpetrators. No one, including any government department or intelligence agency can curtail the fundamental right of freedom of speech, expression and press beyond the parameters mentioned in Article 19 of the Constitution.”

The ruling said that those who resort to such tactics under the mistaken belief that they serve some higher goal delude themselves. Pakistan is governed by the Constitution and ‘Obedience to the Constitution and the law is the inviolable obligation of every citizen wherever he may be and of every other person for the time being in Pakistan.’

The judgement said the TV channels and newspapers had complained about interference in their broadcasts and the delivery of their publications. “We, therefore, tried to determine whether there was substance in their complaints. The organisation of journalists, editors, broadcasters and newspapers complained that media is being suppressed and at times even silenced. The resolution of the Federal Executive Council of Pakistan Federal Union of Journalists makes troubling allegations:

The press freedom in Pakistan is under great threat as there is an unannounced censorship imposed by the State institutions across Pakistan… through coercion, control on advertisement, harassment and even carrying attacks on the journalists… Journalists in particular and society as a whole is scared of from those elements who are either guns, or claiming to be the religious god-fathers.

The Council of Pakistan Newspaper Editors(CPNE) has alleged “media repression”, “that editors and journalists are forced to self-censor their work amid pressure from certain quarters” and it “appealed to all state and non-state actors to refrain from such unconstitutional practices”. It seems that Dawn, the oldest English language newspaper of the country, which was founded by Quaid-e-Azam Muhammad Ali Jinnah, was targeted the most.”

According to the judgement, freedom of speech, expression and the press are guaranteed as fundamental rights in the Constitution. Therefore, the quintessential words of Justice Brendeis [of the US Supreme Court] are equally applicable to the rights conferred by the Constitution upon the citizens of this great country. Quaid-e-Azam Muhammad Ali Jinnah wanted journalists to be responsible, independent and fearless and welcomed criticism.

He said: The power of the press is great, but you must remember that this power which you are wielding is a trust. Look upon it as a great trust, and remember that you are guiding honestly and sincerely the progress and welfare of your nation. At the same time, I expect you to be completely fearless… If I go wrong, or if the League goes wrong in any direction of its policy or programme, I want you to criticise it honestly.

The verdict said that a half century ago Justice Brendeis articulated why the American Constitution had guaranteed free speech and assembly: Those who won our independence believed that the final end of the state was to make men free to develop their faculties, and that in its government the deliberative forces should prevail over the arbitrary. They valued liberty both as an end and as a means. They believed liberty to be the secret of happiness and courage to be the secret of liberty.

They believed that freedom to think as you will and to speak as you think are means indispensable to the discovery and spread of political truth; that without free speech and assembly discussion would be futile; that with them discussion affords ordinarily adequate protection against the dissemination of noxious doctrine; that the greatest menace to freedom is an inert people; that public discussion is a political duty; and that this should be a fundamental principle of the American government.

They recognised the risks to which all human institutions are subject. But they knew that order cannot be secured merely through fear of punishment for its infraction; that it is hazardous to discourage thought, hope and imagination; that fear breeds repression; that repression breeds hate; that hate menaces stable government; that the path of safety lied in the opportunity to discuss freely supposed grievances and proposed remedies; and that the fitting remedy for evil counsels is good ones… Men feared witches and burnt women. It is the function of speech to free men from the bondage of irrational fears.

The judgement said that freedom of speech and expression and of the press are fundamental rights. However, these rights cannot be used to denigrate or undermine . . . the glory of Islam or the integrity, security or defence of Pakistan or any part thereof, friendly relations with foreign States, public order, decency or morality or in relation to contempt of court, or commission of or incitement to an offence.

It said the Pakistan Electronic Media Regulatory Authority (Pemra) Ordinance, 2002, mirrors restrictions as set out in the Article 19 of the Constitution and further prohibits broadcasts which are: “likely to create hatred among the people or is prejudicial to the maintenance of law and order or is likely to disturb public peace and tranquility” 81. The licences which Pemra issues further stipulate that broadcasts cannot be made which “encourage violence, terrorism, racial, ethnic or religious discrimination, sectarianism, extremism, militancy, hatred”.

The Pemra failed to protect the legitimate rights of its licensed broadcasters, the judgement said. Broadcasts by “DAWN” and “Geo” television channels were stopped/interrupted; complaints stating this were acknowledged by Pemra. “DAWN” and “Geo” were particularly targeted in the cantonment and defence housing authority areas, which too was confirmed by Pemra. But, sadly, Pemra looked the other way. It did nothing to protect the interests of its licencees nor took action against those cable operators who were responsible. On 19th March, 2018, and on 24th April, 2018, information was sought from Pemra as to who was responsible, but Pemra professed ignorance, the verdict said.

It said the TLP leadership created hatred amongst the people, they abused, threatened and advocated violence, and this was broadcasted by some private television channels. The intelligence report identified Channel 92 as a television channel supporting TLP and stated that its owners had supplied food to the protesters occupying the Faizabad Interchange. Pemra, however, did not take action under its ordinance against any of its licencees for violating the terms of their licences. Pemra abdicated its statutory duty, a duty which it was legally obliged to fulfill, the judgement said.