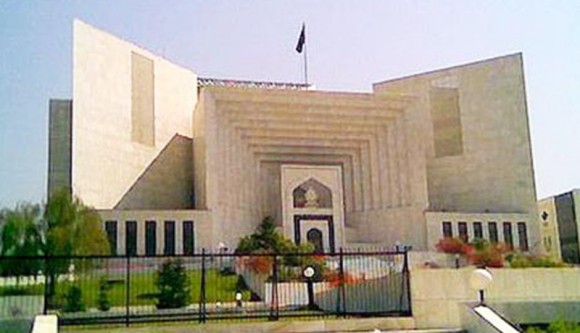 ISLAMABAD: A Supreme Court judge dismissed on Thursday objections raised by a TV show host regarding his fitness to hear a petition filed by Geo TV.

“I don’t find any reasons whatsoever not to sit on the bench,” Justice Jawwad S. Khawaja concluded after dictating a longish order justifying why he should continue hearing a case where Geo TV, through their counsel Akram Sheikh, asked the court to intervene and stop a ‘hate campaign’ which has been launched against it.

“It is the conscience that determines whether a judge should sit and hear a case,” Justice Khawaja explained, adding that courts and judges never succumb to scurrilous and defamatory remarks made against them.

Mubasher Lucman, who hosts the ‘Khara Such’ programme on ARY News, alleged in his show on Wednesday night that Justice Khawaja was related to Mir Shakilur Rehman, the owner of Jang/Geo group.

Admitting that Mir Shakilur Rehman’s sister was married to his brother, Justice Khawaja said, “I do not recall when I last met him. It may have been 16 or 20 years ago at a wedding which I do not even remember.”

Video clips from the show in question were also viewed in court. Following the viewing, Justice Khawaja cited the code of conduct for judges prescribed by the Supreme Judicial Council, the SC judges’ oath of office and the Holy Quran, explaining that these guidelines expect judges to act fairly, justly and impartially, even if they are hearing cases involving their own relatives. These provisions do not bar a judge from hearing cases unless there is a demonstrable cause. “No such cause exists in this case,” the judge said.

Justice Khawaja also quoted the 2013 judgment in the case of former president and retired general Pervez Musharraf, in which it was held that judges do encounter allegations of bias and also receive criticism; some of which may be expressed in civil language, while others may undertake hate speech or outright vilification.

In either case, the judge by training does not allow such vilification to cloud his judgment in a judicial matter. Even extremely derogatory language used against judges does not, by itself, create bias.

Referring to comments made by Karachi-based financier Aqeel Karim Dhedhi in Lucman’s show where he refers to the relationship between the two men, Justice Khawaja observed that the comments may have been made in good faith.

However, such views could have been vetted before being aired, or in the case of a live telecast, it should have been ascertained whether the interviewee was aware of his liabilities under Article 19 of the Constitution.

But the court clarified that it would not embark on an inquiry, as this matter fell into the remit of the regulatory authority, i.e. Pakistan Electronic Media Regulatory Authority, which should ensure that the provisions set out in Articles 19 and 19A of the Constitution were being strictly adhered to.

All litigants, at times, attempt to avoid hearings before certain benches. However, sometimes their motives are not benign and there may even be attempts to intimidate or malign in order to undermine judges or institutions of the state, he observed.

Justice Khawaja also cited examples of cases where attempts were made to defame him during proceedings. “If judges do not deal firmly with such remarks (where unfounded), this may encourage unscrupulous or uninformed elements into saying things which may erode the standing, respect and credibility of the court,” he maintained.