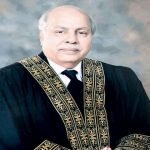 ISLAMABAD: The Supreme Court on Thursday censured the capital police chief over the report on the kidnapping of senior journalist Matiullah Jan which the court found “altogether unsatisfactory”.

“In which age do you live?” Chief Justice of Pakistan Gulzar Ahmed asked Islamabad Inspector General of Police Amir Zulfikar Khan during the hearing of a contempt of court case against Mr Jan as well as his abduction from the federal capital on July 21.

“What is the purpose of writing letters when your job is to probe the crime?” the chief justice asked while heading a three-judge SC bench.

Journalists and leaders of their representative bodies flocked to the courtroom No.1 in large number where the proceedings were held.

At the last hearing on July 22, the SC bench had directed the Islamabad police to record the statement of Mr Jan about his kidnapping.

In response, the capital police furnished a 52-page report conceding that they were still waiting for replies from different government departments the assistance of which they had sought to unearth facts about the kidnapping.

Efforts were under way to trace the culprits involved in the incident and the reports of various departments were awaited to carry out further investigations, the report stated.

“Time is of the essence and even a lapse of 10 minutes in proper investigations will let the evidence disappear,” the chief justice observed. “But you people are engaged in letter writing to different departments.”

The court ordered the IGP to himself supervise the investigation and ensure that the probe was completed within time.

Pointing towards the deputy inspector general of police under whose signatures the report was filed, the chief justice regretted what kind of clerical job the police were engaged in. “You right away should go to the departments concerned, sit there and get the necessary reports with their stamps instead of writing letters,” he observed. Otherwise, he said, it would take years to conclude.

“Please end the culture of writing notes and letters,” the chief justice said, adding that the job that could be done in five minutes was being stretched to five months.

“What is the trouble behind sending specimen by the police to the forensic laboratory for analysis and tests and the call data record from the departments concerned could be obtained likewise,” the chief justice said.

He regretted that the capital police lacked required training to conduct investigations into criminal offences — a habit on display in other cases as well.

“You don’t understand what investigation is and there is a total lack of empathy,” the chief justice observed while pointing towards the IGP, adding that it was not the job of police officers to remain seated on their chairs, but to remain active in investigations.

Justice Ijaz-ul-Ahsan wondered whether the six-member special investigation team (SIT) formed by the capital police had actually started the probe and asked what was its outcome.

At this, Attorney General Khalid Jawed Khan explained to the court that the assistance of other departments, like the FIA, had also been sought for conducting the probe and the National Database and Registration Authority would also file reports.

In the contempt of court case, Matiullah Jan sought time, saying he could not engage a lawyer due to Eid holidays and also because he had remained extensively involved with police investigations.

The court granted four weeks to the journalist to engage a lawyer.

The court regretted that the report furnished by the capital police was all together not satisfactory, adding that investigations were not being carried out properly and police were writing letters and then waiting for replies.

“The investigation officer has to take initiative,” the court said.

Soon after the court hearing, secretary general of the Pakistan Federal Union of Journalist (PFUJ) Nasir Zaidi told the media that the organisation had decided to become a party in the case since the fate of social media was linked with the matter as the contempt of court case had been initiated over a tweet of Mr Jan.

Mr Zaidi emphasised that the constitution ensured freedom of speech and expression and, therefore, they would request he court to hear the PFUJ on Article 19 of the Constitution before deciding the matter.

“The PFUJ is standing by Matiullah Jan,” Mr Zaidi said, adding that the body would continue its struggle to protect freedom of speech. He also deplored that the media was experiencing the worst kind of unannounced censorship. He regretted that police did not have courage to take a stand against institutions.