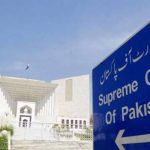 ISLAMABAD   –    The Supreme Court on Wednesday said that neither it will curtail the right of freedom of expression nor it will stop the criticism, asking the federal government to tolerate media’s criticism.

Justice Saeed remarked this when Attorney General for Pakistan (AGP) Anwar Mansoor Khan drew attention of the five-judge larger bench towards current affairs programmes criticising the government for award of contract to one of the contractors namely DESCON, allegedly owned by Adviser to Prime Minister Abdul Razzaq Daud.

The AGP contended before the bench that top court’s January 9 order had ruled that this court will take action if media run any malicious campaign against the construction of dams. He further argued that the said orders were passed on a notice, which was issued to a female anchor of a private TV channel for airing baseless and false content.

The AGP further said that despite the orders, again an anchor did current affairs show on another private TV channel. He read the January 9 order and contended that it is this court which will punish the anchor.

However, Justice Saeed was not convinced and observed that it is freedom of expression. Justice Ahsan asked the AGP to place the content and let the PEMRA provide the clip of the programme.

Justice Saeed observed that there are three categories of this aspect, adding the first issue is freedom of expression, the second issue is publishing or airing an item without due diligence. “Then there is third issue that if it is a deliberate policy then the matter is completely different,” said Justice Saeed.

Justice Saeed remarked that if the matter falls within the third category then this court will examine otherwise it will not issue any directions against the TV channel.

“This court is not spokesperson of Federal Government or WAPDA,” Justice Ahsan observed and categorically told the federal government to make its own defence against such issues. Justice Arab also questioned the AGP as to whether the projects become impracticable if they are criticised.

But the AGP reiterated that the allegations were repeated on another TV channel with mala fide intentions.

However, Justice Ahsan observed that some media workers are working as mouthpiece of others and trying to jeopardise the national project.

“I am not going to stop unfair criticism,” Justice Saeed observed though. “You must tolerate criticism of media, the way we (judiciary) do,” he added.

The bench questioned the federal government on the options for investments of donated fund for generating revenue and in order to keep its value maintain.

AGP recommended that the funds be submitted in government treasury in terms of Pakistan Investments Bonds. He also placed the long-term and short-term plan of investment.

The bench questioned as to whether the amount, invested in long term plan, will be returned in considerable figure if it is required after six months from the date of investment.

At the outset of the hearing, Barrister Saad Rasool submitted a progress report of ICDBM).

According to it, the preliminary works by WAPDA has been completed regarding Mohmand Dam including Geo-Tech Boring, River Gauging Station, Automatic Discharge Measurement, Automatic Weather Station, Project Office at Mardan and Katcha track to Dam site.

The procurement of works including the contractor mobilization of staff, labour and equipment has also been completed in March 2019 and Price Bid Evaluation Report was approved on February 22 this year while the letter of award issued to M/s CGGC-DESCON JV on March 7.

The report further stated that NOC for Chinese Nationals of the Contractor arranged from Ministry of Interior. Contract Agreement with the Contractor was signed on March 26 and it has started mobilising its manpower and detailed schedule of activities will be submitted after receipt from the Contractor within 28 days as per relevant clause of Contract.  Barrister Rasool informed the bench that these 28 days have not been completed yet.

When questioned about financial arrangements, Barrister Rasool quoted four sources and informed the total requirement of the project for Current Fiscal Year 2018-19 is Rs17 billion and this requirement will be met entirely through Public Sector Development Programme (PSDP) adding that the Ministry of Finance has approved said amount.

The other source is Local Commercial Financing wherein three banks HBL, MCB and UBL have provided comfort to WAPDA that required funds of Rs. 33 Billion will be made available within 3-4 months by opening a revolving credit facility that will be repaid by WAPDA issuing bond in the local market.  “Funds will be arranged as per draw down requirement of the project.”

The report regarding Foreign Commercial Financing states that the foreign currency requirement of the project is USD 714 Million. EAD is in advanced stage discussion with Asian Infrastructure Investment Bank to arrange approximately USD 500 Million to cater mainly the electro mechanical equipment.

A framework MoU has been signed between Pakistan and Saudi Fund for Development (SFD) to provide SR300 Million. Cabinet Division in its memo has conveyed that Water Resources Division will explore possibility of seeking Chinese financing in consultation with Finance, Economic Affairs and Planning Development and Reforms Division.

WAPDA equity is Rs29 Billion and the Authority is following up with CPPA-G for clearing outstanding power sale receivables on timely basis.

Regarding Diamer Basha Dam, the progress report stated that the Financial Arrangements is formulated on the same pattern as that of Mohmand Dam.

It stated that the average annual releases requirement from PSDP is Rs. 27 Billion. It added that the framework MoU has been signed between Pakistan and SFD to provide USD 100 million while USD 500 million is being arranged from international financial and capital market through Euro Bond issue.  Permission for raising USD 200 million through issuing Green Panda Bond has also been sought from government.

The total land required is 37,419 acres while 31,768 acres land has been acquired. Negotiations with tribes are underway for remaining land.

Justice Arab told the Chairman WAPDA that this land has to be purchased on certain prices. Justice Ahsan observed that this process has to be accelerated because the dispute will jeopardize the project in case it occurred after the construction of dam. Chairman WAPDA responded that the delay is only on part of tribes and they are deliberating among themselves about delimitation.