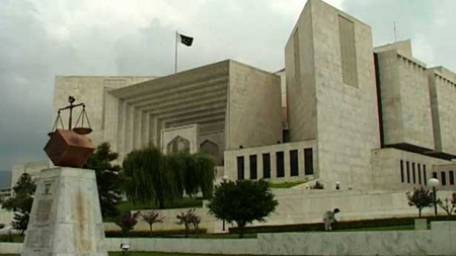 ISLAMABAD: The Supreme Court on Wednesday admitted a petition filed by political analyst Zaid Hamid seeking a treason trial against well-known journalists and the South Asia Free Media Association (SAFMA) for allegedly undermining the Two Nation Theory and glory of Islam. The petition has also nominated director general of the Inter-Services Intelligence (ISI), minister for information and broadcasting and the Pakistan Electronic Media Regulatory Authority (PEMRA) for allegedly failing to curtail such activities. Justice Nasirul Mulk conducted a hearing on the petition in his chambers where Ahmed Raza Kasuri presented himself on behalf of Zaid Hamid. Justice Nasirul Mulk admitted the petition for hearing after rejecting the objections raised by the Supreme Court registrar.

Zaid Hamid has, in his petition, sought initiation of a treason trial against several journalists associated with the South Asian Free Media Association, including Khalid Ahmed, Beena Sarwar, Sarmad Manzoor and Imtiaz Alam, besides anchorpersons Nusrat Javed, Hamid Mir, Najam Sethi, Hassan Nisar as well as former president of the Supreme Court Bar Association (SCBA) Asma Jehangir. The petitioner has contended that the respondents have been undermining the message of Muhammad Ali Jinnah and Allama Iqbal, the Two-Nation Theory, ideology of Pakistan and above all the “glory of Islam”, at the behest of India, and thus portend an existential risk to Pakistan’s national security. The petition also sought a ban on their appearance on TV because “these people gave statements against the Two-Nation Theory, the constitution and Quaid-i-Azam”.

Zaid Hamid has also prayed to the court that an explanation be sought from minister for information and broadcasting, Pakistan Electronic Media Regulatory Authority and director general of the Inter-Services Intelligence over broadcast of such “anti-country” content. The petition was filed by Zaid Hamid two years back on March 27, 2012.