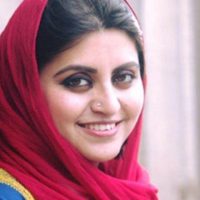 However, according to the senior official, 17 of the 25 Pashtun Tahaffuz Movement (PTM) workers arrested a day earlier along with Gulalai for holding a protest demonstration outside the National Press Club were sent to Adiala jail after the completion of a verification process by police.

The official said that the workers were sent to jail under Section 3 (1) of the West Pakistan Maintenance of Public Order (MPO) of 1960.

Under the order, the 17 will remain jailed for a period of 15 days.

Earlier in the day, Gulalai’s father, Professor Muhammad Ismail, told Dawn.com that his daughter had been arrested on Tuesday.

According to Professor Ismail, the activist was picked up from outside the National Press Club in Islamabad while she took part in a protest against the controversial death of PTM leader Arman Loni in Balochistan on Saturday.

According to Gulalai’s father, she was shifted to an unknown location a few hours after the arrest.

“We are trying to trace her whereabouts but the police is not ready to share Gulalai’s location,” he had said, adding that so far no First Information Report (FIR) of the arrest had been registered at the time.

The detention had been in connection with an FIR that Swabi police had registered on Aug 13, 2018 against 19 PTM leaders, including Gulalai, for their involvement in a public gathering in Swabi where PTM’s Manzoor Pashteen and Gulalai both addressed the crowd.

PTM is a rights-based alliance that, besides calling for the de-mining of the former tribal areas and greater freedom of movement in the latter, has insisted on an end to the practices of extrajudicial killings, enforced disappearances and unlawful detentions, and for their practitioners to be held to account within a truth and reconciliation framework.

Gulalai, a Pashtun and women’s rights activist, was in 2017 awarded the ‘Reach all Women in War’ Anna Politovskaya Award.

She co-founded a non-governmental organisation, Aware Girls, with sister Saba Ismail in 2002. The organisation aims to strengthen the leadership skills of young people, especially women and girls, enabling them to act as agents of change for women empowerment and peace building.

The rights group called on Pakistani authorities to “disclose the whereabouts” of Ismail who they said, “may have been subjected to an enforced disappearance”.