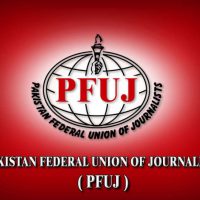 ISLAMABAD (PR): Journalists and media workers on Wednesday staged protests across the country against the unannounced censorship imposed by the “hidden and dark forces” on media and creating hindrances in the distribution of Daily Dawn in the Cantonment areas of the country.

The protests were organised on the call of the Pakistan Federal Union of Journalists (PFUJ) which had launched “Press Freedom Movement” on July 5 against this unlawful action of the “dark forces” which are trying to control the media and are involved in “media management” of newspapers and television channels from behind the curtains.

Most of the protest camps were set up outside the offices of Dawn newspapers, which is facing the on-slaught of these “dark forces” as hawkers are being pressurised and coerced from distributing Dawn newspaper in Cantonment areas across the country while transmission of its television channel has also been closed or disturbed.

At other places, the protest camps were held outside the Press Clubs.

Political leaders belonging to various political parties, members of the civil society, lawyers representatives and civil rights activists visited these camps in large numbers across the country to express their solidarity with the media workers. These leaders assured the PFUJ leadership that they would join this struggle whenever a call was given by the PFUJ. The political leaders and civil representatives expressed their deep concern over the manner in which the hidden hands were trying to control media in Pakistan.

He also asked the owners of newspapers and television channels to speak out.

“I would like to see a statement of All Pakistan Newspaper Society (APNS), Council of Newspapers Editors (CPNE) and Pakistan Broadcasters Association (PBA) on this issue. Your silence is only going to aggravate the situation. Speak Out and let the people know who are the forces behind this unannounced censorship and which “dark forces” are trying to gag the Press Freedom,” he said.

PPP’s Ex Senator Farhatullah Babar while speaking at Islamabad Camp said that the curbs on media are part of pre-poll rigging and a manifestation of State besieged by invisible defacto State within the State. “The defacto State is unaccountable and works at cross purposes with the dejure State,” he said.

“Not long ago the dejure State surrendered against mob violence in Faizabad but the defacto State supported the protestors. Lately the defacto State has stopped the circulation of daily Dawn in the Cantonment areas and held “Garrison State” responsible for this act.

He said that the freedom of expression is being curbed to cover up the unaccountable defacto.

PML_N leader Mushahid Hussain said that it was not the first time in Pakistan that the media was being forced to censor news and follow a line.

He said that democracy cannot prosper without a free media. “Political parties are also facing problems alongwith the media.”

National Party leader Ayub Malik said that Dawn was an institution and the forces which are against Dawn have never allowed any institution in Pakistan to prosper.

Rights activist Tahira Abdullah said that it was unfortunate that a number of news channels and FM channels were being opened on “phone calls”.

She said that we have always fought for the freedom of expression in this country and our fight will continue come what may happen.

In Bahawalpur the protest was led by Vice President Amin Abbassi and office-bearers of Bahawalpur Union of Journalists.

In Lahore, the protest was led by Punjab Union of Journalists President Naeem Hanif and PFUJ Finance Secretary Waseem Farooq.

Hyderabad protest camp was led by PFUJ Vice-President Khalid Khokhar and Lala Rehman while Sukkur protest was led by Lala Asad Pathan and leaders of Sukkur Union of Journalists.

In Multan, the camp was led by Multan Union of Journalists President Abdul Rauf Mann while in Abbottabad Assistant Secretary General M.Haroon led the camp.

In Faisalabad, the camp was set up outside Dawn Bureau and led by leaders of Faisalabad Union of Journalists.

Similar protests were also held in Gilgit-Baltistan and several cities of Azad Kashmir.