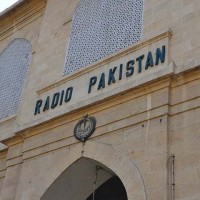 Quetta: The Balochistan government has finalised a plan to take over 64 acres of land owned by Radio Pakistan in Quetta by shutting down the station’s transmission, removing its machinery and transmission towers from the Sariab area.

On Wednesday, sources confirmed that government officials had been directed to put finishing touches on the plan to take over land worth billions of rupees belonging to the radio station. Sources claim that the land was being taken over under the pretext of constructing a sports complex and park.

“You will not be able to listen to local shows or programmes in other languages from Radio Pakistan Quetta,” said a senior Radio Pakistan official while talking to IDawnI. “The government is going to remove the transmission towers and other machinery from the land on Sariab Road. It was allotted to Radio Pakistan in 1964.”

He added that by using this piece of land for a sports complex would be like gagging the voice of the station as it would be take several shows, including those on recitation of the Holy Quran and other popular programmes in different languages, off the air.According to the station’s senior official, when a government official was asked about why they wanted these 64 acres, he replied: “Some people have had their eyes set on this precious land for a long time. They want to take over the land by claiming to build a sports complex even though Quetta already has a large sports complex [Ayub Stadium].”

The station was set up in Quetta in 1956 on 64 acres on Sariab Road. In 1959, Radio Pakistan installed medium-wave and short-wave transmitters on the property so the station’s programmes could be heard all over the province.

Radio Pakistan Quetta had installed 93.5 kilowatt transmission on the site before Ramazan this year, and had launched an FM transmission, “Sout-ul-Quran”, for programmes related to recitation of the Holy Quran and Islamic teachings.An official of Radio Pakistan expressed fears that if the provincial government decided to go ahead with the plan, these transmissions and shows would have to be taken off the airwaves.

He added that he did not know why the provincial government was insisting on constructing a sports complex on Radio Pakistan’s property. A senior official of the radio station said the Pakistan Broadcasting Corporation should take notice of what was happening in Quetta and ask the federal government to release funds to install powerful transmitters and other equipment to enable Radio Pakistan Quetta to air its programmes for listeners across the province.