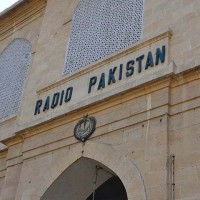 The contractual employees working in different sections of Radio Pakistan, Rawalpindi have voiced strong protest against non-disbursement of salary for the last eight months.

The contractual employees said that payments were regularly made to permanent employees of the radio, while meting out discrimination to them. This has pushed them to the brink of financial collapse, they added.

They said that it was a fact that the contractual employees burn the midnight oil and execute all major programmes, but their toil and work hardly gets any recognition.

“The regular employees turn up only for a few hours and that too just to mark their attendance. On the other hand, the contractual workers are burdened with most of the work with a minimum reward,” said a visibly frustrated employee requesting not to be named. According to him, the axe only falls on the daily wagers and contractual employees if they dared to protest.

A source in Radio Pakistan Islamabad told the news agency that the picture was no different in the capital office. The contractual employees have been receiving late payments. The source said that senior management spent radio funds on “frivolous projects” and Radio Pakistan Islamabad has been facing financial crunch to make payments to the contractual employees.

The contractual employees in Rawalpindi warned that they will be compelled to stage a sit-in outside the ministry of information and broadcasting if the issue of their pending salaries was not resolved immediately.

Attempts were made to take the version of Radio Pakistan Director General Saba Mohsin, but she could not be reached for comments. An official at the DG office claimed that the issue will soon be resolved as the government has allocated funds for radio in the current budget.