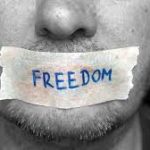 Freedom of expression is a fundamental right. Though this right is violated in autocratic governments and dictatorships, all functioning democracies have a mechanism to defend this right without which no civilized society commands respect of the global community in the 21st century. The UN recognizes this right as enshrined in its declaration of human rights. However, a new legislation is on the cards in the country – ostensibly in the name of respect for the armed forces of the country. The bill –approved by a National Assembly standing committee – seeks to amend the PPC to send anyone to jail for two years or fine them for Rs500, 000 or both, if that person tries to defame the army. The opposition parties, the Pakistan Bar Council, and some other civil society activists and organizations have demanded withdrawal of the bill.

There are already existing defamation laws that offer plenty of coverage to any individual or organization if it feels defamed or disrespected. In fact, the NA standing committee should have known that Section 500 of the PPC is clear about providing punishment for the defamation of anyone – be it an individual or an organization. Now the new bill proposes the addition of Section 500-A, the sole aim of which appears to be gagging freedom of expression which is already under threat from various quarters in the country. The constitution guarantees this freedom which should not be curtailed in the name of national security.

The armed forces have, through the history of Pakistan, done a great deal to defend the country against both internal and external threats. By acting in this fashion, they have won respect from the people and praise from many quarters. Which is why such laws are also against the integrity of a much-respected institution. The purpose of all legislation is essentially to protect and respect the rights of citizens and all institutions are legally bound to do so. It is not a good idea to protect impunity under various disguises. The constitutional domains of all institutions are clearly defined and, given the long history of anti-political interference and interventions in the country, the right to criticize and pinpoint transgressions and violations of the constitution must remain intact