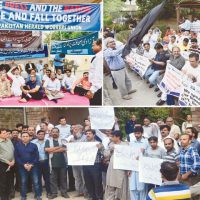 ISLAMABAD: A large number of journalists, politicians, lawyers and civil society activists showed up at protest camps set up by the Pakistan Federal Union of Journalists (PFUJ), headed by Afzal Butt, across the country on Wednesday to express solidarity with Dawn newspaper and DawnNews TV channel.

The PFUJ has also given a call for boycott of Senate proceedings and a sit-in outside the Parliament House on Thursday (today).

The distribution of Dawn newspaper has been disrupted and transmission of its news channel blocked in cantonment areas for a couple of months.

Addressing protesters in Islamabad, PFUJ president Afzal Butt said: “It is unfortunate that when the director general of the Inter-Services Public Relations, in a media briefing, asked the media owners to publicly announce if they were being pressurised, not a single media owner, except Dawn’s, demonstrated the courage to say that their group was being pressurised.”

Mr Butt demanded that unannounced censorship be stopped and advised the media owners not to compromise on freedom of media.

Senior journalist Nusrat Javed said it was unfortunate that the media was being forced to follow instructions.

TV anchor Talat Hussain said: “Dawn is a project of the Quaid-i-Azam and closing it means stopping the message of Quaid.”

Journalist Murtaza Solangi said that people had the right to decide which newspaper they wanted to read. “Those elements which have been curbing media should focus on their industrial business and let the media persons decide about the media. Today we are sitting outside the Dawn office, but tomorrow we can sit outside your doors,” he warned.

Senior journalist Nasir Zaidi said censorship started in Quaid’s lifetime when the establishment decided that his speech of Aug 11, 1947, would not be published by newspapers and it was only Dawn which published it.

Vice chairman of the Pakistan Bar Council Kamran Murtaza said that Dawn was the Quaid-i-Azam’s newspaper and efforts were being made to close it.

PML-N Senator Mushahid Hussain Syed said that it was not the first time in the history of Pakistan that the media was being forced to censor news and follow a line. He said democracy could not flourish without free media.

Condemning the curbs on Dawn, former senator Farhatullah Babar termed it a part of pre-poll rigging and the manifestation of a state besieged by invisible de facto state within the state.

“The de facto is unaccountable and works at cross purposes with the de jure and elected,” he said. “Not long ago the de jure state surrendered before mob violence at Faizabad because the de facto supported it. Lately, the de facto has stopped the circulation of Dawn in selected areas of the country.”He said that no one could stop Dawn circulation in cantonment areas.

Mr Babar said that the garrison state not only manipulated media freedom, but also started building its own media empire, like the 56 business and industrial complexes it had already built.

He recalled that Asma Jahangir had filed a petition in the Supreme Court, asking it to order the government to disclose the number of media outlets run by the ISPR to ensure that these were properly monitored by the regulatory authorities, and asked the human rights bodies to take up from where Asma Jahangir had left.

The Karachi Union of Journalists set up a camp outside the Dawn office in the city to express solidarity with the media group. PFUJ secretary general Ayub Jan Sarhandi, KUJ president Faheem Siddiqui and Editor Dawn Zaffar Abbas spoke on the occasion.