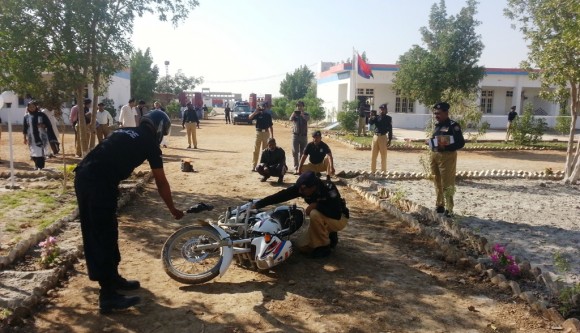 Speaking at a three-day training and safety workshop for media organized by Pakistan Press Foundation (PPF) here Wednesday, he said media is playing a valuable role for elimination of crimes from the society. He said impressive performance of media people and free media policy in Pakistan are helping in introducing positive trends in Pakistan. He told that the Regional Police Training Center Hyderabad was the largest police training of Pakistan area-wise and steps are being taken to further improve it. He said a big garden could also be developed on the land of this police training center at Gunjo Takker Hill which would beautify the area and provide recreational facilities to area people. He sought cooperation of journalists in this regard.

He said interaction sessions of under-training cops with media professional would help them in better understating community police concept. He said that we are improving the standard of police training, so that they could perform better job and deal with any kind of situation without the support of rangers. He welcomed PPF for arranging this important training workshop at his police training center. He offered arranging lectures on safety of media for the members of Hyderabad Press Club (HPC).

PPF Media Training Coordinator Nasim Shaikh said PPF has started a series of safety and training workshops in different parts of the country, which would not only train them to cope with safety and security challenges while carrying out their day to day professional activities, but also improve their relations with police and civil defence departments. She said PPF is arranging these trainings in collaboration with Free Press Unlimited. She appreciated the efforts of RTC Hyderabad and said that such steps will result in changing attitudes of police and media people.

Hyderabad Press Club general secretary Mansoor Marri said PPF is doing a wonderful job regarding safety training of journalists as presently security is one of the major issues faced by media in Pakistan. He welcomed the offer of Brohi and appreciated RTC for facilitating safety and security training for journalists.

Mansoor Mari appreciated the training effort said that such steps will build better relations between police and journalist and help them in doing their jobs more effectively and more importantly, more securely.

The participants of workshop were first asked to share their safety and security related issues they faced during their duties.

Fahim Babar, a TV reporter, while sharing his experience said that his team was once trapped in a firing incident and there was no way out. A crime reporter, Imtiaz Ali discussed his experience of investigating the murder case of the son of a sessions judge. He shared how he was threatened by different authorities and how it affected his mental health. Amjad Islam Amjad, another participant shared a recent incident where a mob surrounded the HPC building. He said that, ‘the angry mob was declaring us the agents of the West and throwing things towards our building. ‘Our lives were on stake.’

The stories were helpful to highlight the major safety and security issues to journalists. The issues, as highlighted by Nasim Shaikh, included risk assessment, stress management, tackling the mob, protection of evidence and how to deal with trauma. Everyone at the workshop was hopeful that this three days workshop will help journalists to tackle safety and security issues during their jobs.

The police instructor, Ikram Gujjar briefed the journalists about civil disturbance. He stressed for astrong coordination between journalists and police. He said that ‘everyone should know his/her limits. Police should know how it should work and so do the journalists.’ He further briefed the participants about police work procedure. He emphasized the need for journalists to maintain a safe distance from incident place, specifically during bomb blasts and cross firing. He asked journalists, ‘you should always assure your identity prominently and try not to dissolve among mob. The step, if taken, will help police to differentiate journalists from mob.’

The chief law instructor, Ali Gohar Langah informed the journalist about Pakistan Penal Code (PPC) sections which police use to disperse mobs. ‘When five or more than five people gather at some place for the common interest violating government ban, police uses PPC’s section 146, 147 and 148 to disperse them,’ the instructor told. He further said that police cannot open fire on mob unless started by the mob and that too upon District Commissioner or Magistrate’s instructor in his/her presence.

A mock bomb blast scene was also established inside RTC where police instructors practically briefed the journalist about dos and don’ts. They were kept on safe distance and told how to ensure their safety. The instructor requested journalists to always prioritize their safety and let first police clear the area.