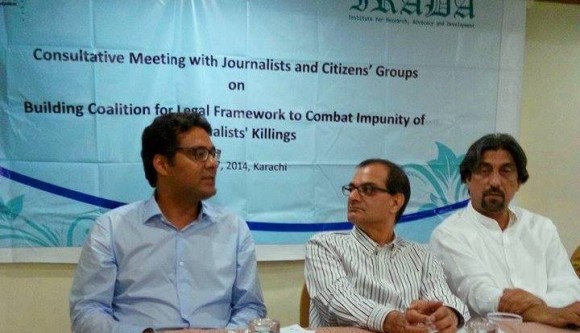 KARACHI: Senior journalists are worried about the future of the media in Pakistan and admit that they are leaving behind a far more insecure environment for budding professionals.

Several professionals agreed that different media houses should work together to tackle this problem before it worsens. They were speaking at a consultative meeting with journalists and citizen groups on ‘Building Coalition for Legal Framework to Combat Impunity of Journalists’ Killings’ organised by NGO Institute for Research, Advocacy and Development (Irada) at Mehran Hotel on Wednesday.

“The state actors were active in the 1980s but now non-state actors, such as banned outfits, are the most active and issue hit-lists of journalists of different organisations,” pointed out journalist Ovais Tohid. He stressed on training reporters, cameramen and photographers who work in conflict zones.

Tohid was of the view that self-regulation within organisations is very important. “The code of ethics and the code of conduct should be made.” Most of the journalists who receive threats contact different journalists’ organisations instead of approaching their own media houses, he said regretfully.

“The role of the media is very important in a democratic set-up and it is a high time to initiate self-regulation,” endorsed Karachi Bar Association president Salahuddin Ahmad. “We are at a loss and have become victims as well,” he said.

Ahmad said that about 40 lawyers have been killed in the last four years in targeted attacks and there is an urgent need for different media persons and lawyers to unite and demand security.

“We need to be united on the issue of safety and security of journalists,” said Owais Aslam Ali, the secretary general of the Pakistan Press Foundation. The divisions within the journalist community will not create a favourable environment, he said. Ali pointed out that there is not a single body where a journalist who receives any sorts of threat can lodge a complaint.

The participants said that working journalists should support each other in case of serious threats. “Journalists in Pakistan receive various kinds of threats,” said Irada’s Lala Hassan.