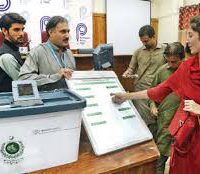 Islamabad – The Presiding Officer at Islamabad Model School (I-V) No. 1 for Boys, sector I-10/1 Islamabad barred the media persons from entering the polling station as the polling started soon after 8am.

“We have no instructions when to allow media inside the polling stations,” the Presiding Officer at polling station No 185 (Male) told this scribe when asked to let inside to oversee the process. The police deputed at the gates of the facility didn’t know how to deal with the media persons.

They called the Presiding Officer at the gates only to tell media that they are not allowed inside during the first half of the day.

When the ECP was contacted on the numbers 051-9217141 and 0333-6485668, a senior level officer assured to rectify the issue. However, when around 2pm, the polling station was visited again; the answer from the Presiding Officer was the same. The ECP officials were approached but seemed helpless before the presiding officer.

The matter was also brought into the notice of the Deputy Commissioner Islamabad but the issue remained for the entire day.