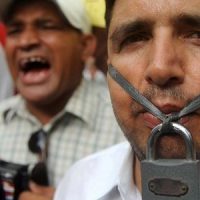 AGAINST sane advice, the PTI government has moved ahead with its agenda to tighten its control over the media. On Thursday, the federal cabinet approved the creation of the Pakistan Media Regulatory Authority that will enable the government to ‘regulate’ all media in the country from one platform.

The step has come in the face of strong resistance from media organisations and journalists amid severe criticism of the PTI setup’s overall handling of the conventional fourth pillar of the state. The government’s move is especially senseless when it is considered that print and electronic media are separate entities, each with its own defining features.

Indeed, democratic societies, while they may see the necessity to have regulations for the 24/7 electronic media, allow news publications to check their own content through a code of ethics — in keeping with the principle of freedom of expression.

Unfortunately, the PTI’s move to bring all media under state control, smacks of an authoritarian streak that should have no place in a democratically elected setup. Remarks such as those uttered by Information Minister Fawad Chaudhry on Thursday that all bodies representing journalist bodies would be taken ‘on board’ in formulating rules for the PMRA gloss over the fact that these very bodies i.e., CPNE, the Press Council, APNS and PFUJ, had already opposed the creation of the new regulator.

It is no secret that the PTI government has an adversarial relationship with the media. Much of this is the rulers’ own fault. They have unwisely created an atmosphere where any criticism of the government is seen as an ulterior motive, leaving little room for an exchange of views which is central to a nation’s progress. On too many occasions, PTI cadres have denigrated the press and hurled invectives at those who have raised questions about the government’s performance.

This is a short-sighted approach, especially when the PTI itself has been one of the biggest beneficiaries of media freedom in Pakistan. It makes little sense for it to try and destroy the very vehicle which has helped it reach the seat of power.

Crucially, by its actions, it has also shown contempt for the long, difficult journey taken by Pakistan’s press. Over the course of the years, journalists have been imprisoned, tortured and killed in the line of duty. Their hard-won gains must be defended, in fact, built upon, not snatched away by a setup that seeks dictatorial ‘solutions’ through the creation of a new regulatory body —without realising that it is setting a trap the government itself could fall into.

With the rulers in full war regalia, it seems that it is now up to the media itself to protect its freedoms, and unite in the face of any attempt to shake the foundations of an independent press.

The Nation: A New PEMRA?