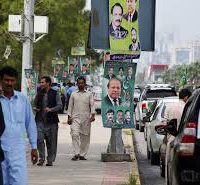 Safdar Klasra, a reporter with Bol TV, told Dawn that he was taking a photo of an ambulance that was stuck in traffic near the Faizabad interchange. “As soon as I snapped the photo, I was slapped from behind and assaulted by a group of workers,” he said. He said that two of his women colleagues, Benazir Mehdi and Naila Afser, were also manhandled in the melee.

Office-bearers of the Rawalpindi-Islamabad Union of Journalists condemned the manhandling of reporters and cameramen from private channels by the PML-N workers during Nawaz Sharif’s rally in Rawalpindi.

Even Maryam Nawaz Sharif took to Twitter to warn supporters not to mistreat mediapersons. “Dear PMLN supporters, pls refrain from attacking or misbehaving with anti-N media houses. It’s neither our party culture nor NS legacy,” she tweeted.