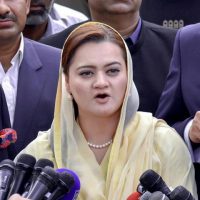 ISLAMABAD: The Minister of State for Information, Broadcasting, National History and Literary Heritage Marriyum Aurangzeb said the present democratic government of PML-N firmly believes in fundamental and constitutional right of freedom of expression and would continue to facilitate the growth of free and responsible media in the country.

She was talking to a delegation of All Pakistan Newspapers Society (APNS) on Friday.

She said that an independent media is a part of democracy and the government acknowledges the role of media as a watchdog of society.

She said that the government was making all possible efforts to create a congenial atmosphere for media personnel so that they could perform their obligations in accordance with their professional ethos.

“Journalist safety and security bill is in the pipeline, which would prove instrumental in ensuring protection and safety of journalists,” she added.

The delegation appreciated the role of the ministry in facilitating the media industry.