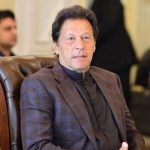 He said that the independent media has a crucial role in democracy, as it worked as a watchdog and if he was sincere, he would take action against a minister, pointed out to be involved in corrupt practices.

The National Coordination Committee (NCC) Friday decided to allow movement of goods transport, ensuring smooth supplychain of edible items in view of the lockdown. Like Sindh, the shops would be restricted to be close down at 8:00pm.

The corona patients in Punjab have crossed number of patients in Sindh. He said that there would no increase in gas tariff. To this effect, the committee met here with prime minister in the chair. The forum had a detailed overview of the situation arising out of the coronavirus pandemic in the country and the related measures and their repercussions and impact.

The prime minister announced the decisions of the committee and had an interaction with media persons as well. He was optimistic that the war against the virus would be won with a united resolve of the nation and prudent and timely decisions. He said those arrested by the police during the lockdown be set free, as people were facing difficult times.

He emphasised that incremental response was essential because of peculiar circumstances of Pakistan and the virus is a new phenomenon and time is required to come up with well-thought-out decisions and strategies to deal with the challenge.

The prime minister again said total lockdown is not feasible keeping in view the condition of the poor people in the country and he had in his mind a plan to first put up a structure to provide much-needed relief to the weak segments of the society, who are to be hard hit by the lockdown, including vendors and daily wagers.

About the goods transport decision, he said today all the four provinces, Azad Kashmir and Gilgit-Baltistan collectively decided that there would be no inter-provincial restriction on transportation of goods. Likewise, the industry allied with edible items would also be free from any kind of restriction as well but passenger traffic would remain suspended.

The prime minister announced to form a youth force of volunteers titled the Corona Relief Tigers Force (CRTF) to distribute food at homes of weak segments of the society. He explained its members would be recruited through PM Office Citizen Portal and registration would start from March 31.

Through a data, relief items would be provided to the poor people and the relief force tigers would also identify such people and be tasked to provide food to the areas, hard hit by the virus. However, a mechanism would be put in place to avoid duplication with deployment of the force. The meeting also decided to give necessary training to the health practitioners, initially those engaged in ICUs or dealing with emergency cases.

The prime minister said that as compared to even advanced countries, the virus had not spread fast in the country. However, he hastened to add that there could be no guarantee that after two weeks, the virus cases would not suddenly increase and preparedness was necessary for the worst situation and the government would try its best to contain it with the cooperation of masses.

Moreover, the prime minister also announced establishment of a PM fund for coronavirus, wherein charity funds could be deposited to be spent on those affected by the crisis while the Ehsaas Programme would continue providing relief to people. The prime minister said Rs12,000 would be given to the poor people for next four months and the government would weight options on how to provide further relief to them.

He would open an account at the State Bank of Pakistan next week and overseas Pakistanis would be requested to deposit their amounts there so as to giving a boost to foreign exchange reserves and lessening pressure on Pak rupee, which was already there.

Replying to questions from journalists, the prime minister said that he feared there could be greater danger than the virus and it was taking decisions in panic and when people would go for more buying and storage of items, the prices could also go up besides shortage of the same.

The prime minister noted that the government is under pressure with regard to demands for arrival of thousands of Pakistanis stuck in several countries but would let them in groups and make arrangements for their screening from early next month.

He emphasised that his government was working on having one system for the powerful and the other for the weak while referring to divine saying of the Holy Prophet (Peace Be Upon Him). “I have no idea and none contacted me,” was his reply to a question by a journalist that no action was taken against a fashion designer, who allegedly let go her servant to his Vehari town, who was tested positive for the virus.

In reply to a question about meeting Shahbaz Sharif and Bilawal Bhutto Zardari, he preferred to remain silent. In reply to another question if he would straight away talk to President Trump on sanctions on Iran, being a great injustice, the prime minister said he knew, “the nation needs a healing touch, as a small segment of the society is privileged: indulge in corruption and money laundering and our country can’t arrest him and put him in jail. Higher education and private hospitals are meant for that small privileged class”.

The prime minister continued, “If I am a rich and powerful person, this country’s justice system can’t do anything against me. The oppressed in this country needs a healing touch, who is neither given good education nor even clean drinking water. He is also Pakistani and a stakeholder. But, if a poor person steals bicycle, he is jailed for six months and on the other hand, those involved in billions of rupees money laundering remained in government for 30 years and get treated abroad that is why no good hospital exists here, as the rich like him never gets treatment here and today they are criticising this government for poor health facilities”.

He said the biggest injustice was class-based system of the rich and the poor while his government is taking unprecedented measures to provide a healing touch to the common man, which included legal aid system, unified syllabus, health card etc.

The prime minister did not agree with a journalist that the Taftan matter was mismanaged and said that there were just three rooms and when Dr Zafar Mirza visited the site on February 27, he found no facility at all while Zaireen were to be allowed inside the country and after that an effort was made for provision of facilities there and the government of Balochistan had no such resources: the army established a makeshift screening facility there.

The prime minister said he knew who was doing what even on social media and whosoever would try to divide the nation would suffer himself.

Speaking on the occasion, Minister for National Food Security Makhdoom Khusro Bakhtyar said wheat stock of 1.6 million ton was available in the country, which is sufficient till the harvesting of next crop, which had started in Sindh.

He said a proper mechanism was being devised with coordination of all provinces for purchase of wheat and added flout quality would also improve for which directions had been passed.

Special Assistant to PM on National Health Services Dr Zafar Mirza said personal protection equipment would be available to all frontline health staff by fifth of next month. He noted surprisingly unlike other countries, 61 percent patients with coronavirus were between age group of 21-50. He added a short crash course would be imparted to doctors, nurses and paramedics in the next four to five weeks to deal with pandemic situation.