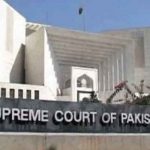 ISLAMABAD: Journalist Matiullah Jan, who went missing for 12 hours on Tuesday, linked his abduction to the contempt case being heard by the Supreme Court, while the apex court observed that no institution has the right to take law into its own hands.

A three-member bench of the apex court headed by Chief Justice Gulzar Ahmed heard the contempt case against Matiullah Jan. The chief justice said every citizen has the right to a fair trial as the Constitution gives full right to private life.

The court on July 15 had issued a contempt notice to Matiullah Jan for using contemptuous language in his tweet against the judiciary. On Wednesday, Matiullah Jan and the Attorney General for Pakistan Khalid Javed in pursuance of court’s last order appeared before the court. Matiullah Jan linked his abduction to the contempt case being heard by the Supreme Court against him. The journalist started saying how he was threatened and what was going on. However, the chief justice asked the journalist to submit his written reply and cautioned him to be careful while speaking.

The chief justice asked Matiullah Jan whether he has filed his reply in the contempt case. The journalist submitted that as he had been abducted, he could not file reply. He sought time for engaging a counsel as well as submitting his reply.

“We have to respect law and dignity of court,” Justice MushirAlam observed. Earlier, at the start of the haring, the chief justice asked the attorney general that there was hue and cry on media that the alleged contemnor in this case was kidnapped. The chief justice asked AG as to whether the police have recorded the statement of Matiullah Jan after he was recovered.

The attorney general read out the statement of brother of Matiullah Jan who had lodged an FIR in the Abpara Police Station. The AG said the statement was not recorded in lieu of the pending suomotu case in the apex court.

The chief justice however, said that statement should have been recorded by the police. “What your government’s departments are doing, and where is the IG Islamabad,” the CJP asked. The attorney general submitted that on behalf of the government he assures that strict action would be taken against the persons found involved in the incident and that the law will take its course.

“No agency or institution has the right to take matters into its own hands,” the chief justice responded by saying. “I am sure that the court will conduct a fair trial,” the journlaist said, adding that his abduction was related to the case.

Sardar Latif Khosa, senior advocate, who appeared before the court on behalf of the Pakistan Bar Council, expressed concerns over the abduction of the senior journalist. The chief justice observed that the contempt case of the alleged contemnor has nothing to do with his kidnapping. Latif Khosa replied that his recovery could not have been possible if there was no suomotu case of the apex court.

At one instance, Matiullah Jan objected to the word alleged abductee, saying he was really abducted. Justice IjazulAhsen asked him that it’s a court language.

The court directed Inspector General of Police Islamabad to submit a comprehensive report before it on the next date of hearing regarding the action taken by the police in this regard. The court granted two week time to Matiullah Jan for engaging his counsel and submitting his reply in the contempt case.

Meanwhile, the Islamabad High Court (IHC) slammed the police for the kidnapping of journalist Matiullah Jan, saying that the entire state was responsible for the incident. The IHC was conducting the hearing of a petition regarding the journalist’s abduction.

“The way a journalist was picked up in broad daylight, have all institutions been destroyed?” asked IHC Chief Justice AtharMinallah. “How did anyone, wearing a police uniform, dare to abduct a person?”

Justice AtharMinallah said the responsible wanted to create panic. He said that there would be anarchy in the country if there was no rule of law. Deputy Inspector General of Police (DIG) Islamabad Waqaruddin Syed informed the court that a first information report pertaining to the incident had been registered against the unknown people. The chief justice asked that why the sections of Anti-Terrorism Act had not been added in it.

The chief justice stated that this was a test case for Islamabad Police after the CCTV footage of the incident was found. The petitioner’s lawyer Jahangir Jadoon requested the court to direct Islamabad police to submit report after conducting investigation into the matter. The court, however, disposed of the petition.

meanwhile, the Supreme Court took notice of objectionable content on social media platforms in the country, noting that such forums are rife with content that incite hate against Pakistan’s institutions.

The apex court was hearing a case against suspect Shaukat Ali pertaining to a sectarian crime when the topic came under discussion.

During the hearing, Justice Qazi Ameen said that the public, through YouTube videos, is being instigated against the Army, judiciary, and the government. “Was action taken against those who committed this crime?” said the judge, asking further if the Federal Investigation Agency (FIA) and Pakistan Telecommunications Authority (PTA) have noticed the content that is being uploaded on YouTube.

“On YouTube and social media, even our families are not being spared (from criticism),” said Justice Ameen. “We gave a verdict yesterday and today it was there on YouTube,” said Justice Qazi, adding that everyone acts like an expert on social media.

He continued that the public can speak regarding the judges’ performance and decisions, stating that they do not have an issue with freedom of speech. To this, the PTA officials told that the bench that the Authority cannot remove content posted by individuals, rather, they can only report it.

“In several countries, YouTube has been banned,” observed Justice Alam, adding that in those countries, social media platforms are controlled by local laws. The court, subsequently, issued a notice to the Foreign Ministry and the Attorney General for Pakistan in the case and adjourned the hearing.

Newspaper: The News, The Nation, The Express Tribune, Dawn