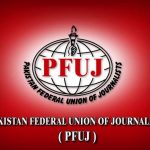 SUKKUR: The Pakistan Federal Union of Journalists (PFUJ) has said that the journalist community stands by court reporter Mateeullah Jan against whom a contempt of court notice has been issued by the Supreme Court over his tweet about the apex court’s judgement in the Justice Faez Isa case.

There are dozens of issues confronted by the people of Pakistan on which suo motu notices should be taken as they will bring credibility and respect to the apex court, they said. The PFUJ called for withdrawal of the contempt notice issued to Mr Jan, saying it was an unjustified action during an already charged atmosphere in the country.