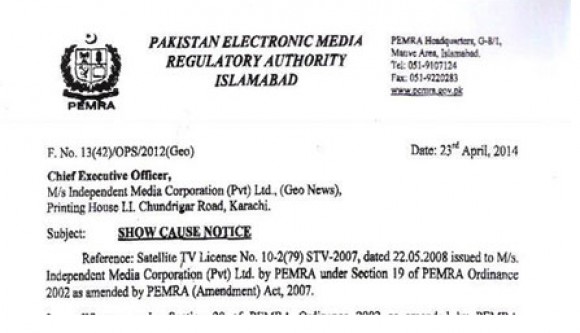 ISLAMABAD: The Geo TV management on Wednesday received a show cause notice from the Pakistan Electronic Media Regulation Authority (Pemra) wherein it had been asked to immediately stop airing any content in violation of the Pemra rules.

In the notice, the Pemra directed chief executive officer (CEO) of Geo News to appear before it for personal hearing on May 6 at 11:00am at its headquarters here.

The Pemra said in the notice that a complaint was received on Tuesday from the Ministry of Defence, initiated by the Directorate General ISI with CDs (video recording) and a copy of transcript.

It said that after firing on the car of anchorperson Hamid Mir, the channel launched a “malicious campaign” airing “false accusations” against the ISI and its senior officers.The notice said it had been further alleged by Deputy Director General ISI that the “reporting made and programmes aired can’t be viewed as a single event. GEO Network had a history of acting illegally in furtherance of anti-Pakistan agenda.”

The Pemra noted in the notice that “whereas the content of the complaint and video recordings provided by the complainant appear to be in violation of the Section 20 of the Pemra Ordinance, Rule 15 of Pemra rules, 2009 read with clause (d) (e) (g) (h) and (j) of Pemra Code of Conduct as well as Regulation 18 (i) (c) of Pemra (Television Broadcast Station Operation Regulations), 2012 and clause 29 of the terms and conditions of the licence, you had signed.”