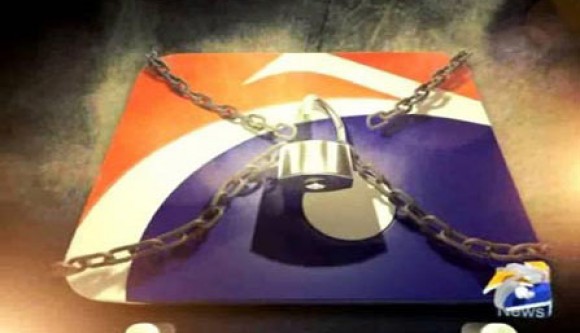 KARACHI: The Pakistan Electronic Media Regulatory Authority (Pemra) has ordered the Geo News to shut down for 15 days. This goes against the sentiments of civil society, parliamentarians, political parties as well as all journalist associations, including the APNS, CPNE and PFUJ besides international human rights and freedom of speech advocacy groups like the Amnesty International, Reporters Without Borders, Committee to Protect Journalists, Human Rights Watch, Freedom Network and Pakistan Human Rights Commission, among scores of others.

The Pemra sent a formal letter on Friday June 6, 2014 ordering the Geo News to immediately shut down its transmission as well as to pay Rs10 million fine.A Jang Group/Geo spokesperson said on Friday night: “The decision taken is a grave injustice to the oldest, the biggest and the most popular media group of Pakistan. It appears the government finally gave in to the pressure of the powerful unseen forces and rushed through the decision to suspend the transmission of the leading independent and the most popular news channel in the country.”

The irony, he said, is that never in Pakistan any channel had ever been suspended, either by Pemra or even by any court. Even the channels that were owned by large business houses and gave biased and twisted news coverage to protect their business interests had never faced such a penalty. Channels that ran sustained campaigns to defame the Chief Justice of Pakistan and defamed the honourable judges of the Supreme Court and High Courts and even those caught red handed planting interviews to malign the Chief Justice of Pakistan had never been cautioned or penalised.

Not only this, channels and TV hosts who had openly raised doubts and suspicions about the Pakistan Army chiefs and prime ministers of being murderers, traitors or foreign agents had not been touched. Incitement to violence and proven defamation by these channels was never considered a big crime for them to be suspended or even fined.

The most vociferous TV anchor of a rival channel before retirement of the COAS had called him a CIA agent. He said this on live TV and then encouraged tweets to support his allegation. But neither he nor his channel faced any consequences.

According to the spokesperson, the Pemra action will damage the country as the first-ever TV channel to be suspended is a channel that had become the icon and spearhead of an independent media with a free editorial approach. It is the only channel that had transparently published its editorial policy on its website in the form of Geo Asool and which maintained the record of the most accurate and timely news coverage.

While the ISI’s complaint against Geo was only about a few hours of transmission on just one of its channels, all of Geo Network channels were virtually put off air by unknown forces — not very unknown though.

Geo had been condemned Supreme Court, through a 3-member bench, ordered it to be opened but nothing happened. Even Geo Kahani, Geo Entertainment, Geo Tez and Geo Super were shut, displaced or distorted. Dozens of Jang Group newspaper vans have been burnt, hawkers, reporters and editors beaten up and harassed.

No one has given us justice. Already Rs2 billion loss has been inflicted in an effort to coerce and force the Jang Group to fall in line. It is expected the losses will reach Rs2.7 billion (approximately US $27 million). This is the real penalty Geo has been forced to pay, which is unprecedented even by international standards.

Prime Minister Nawaz Sharif had publicly stated that he was against any curbs on the independent media and against shutdown of any TV channel. Parvaiz Rashid, the Information Minister had also categorically stated on record that the government would not shut down any channel. He had assured that the government had avoided shutting down any channel in the past even though there was pressure from courts.

The 15 day official closure added to the 45 days of an illegal shutdown equals 60 days of closure. It should be noted that during the 2007 emergency of General Pervez Musharraf all channels of Geo Network were shut for approximately 90 days.

The Jang Group and GEO TV Network have faced such adversity from governments, civilian and military alike. Successive governments have tried to shut it down, stop its advertising and distort its transmissions and distribution through cable operators in the past.

Losses of over Rs8 billion had been inflicted on the Group (Approximately $80 million). The constitutional and intrinsic right of the viewers and readers to information and free and independent debates and analysis has been unconstitutionally hampered. Without these freedoms Pakistan cannot progress and be counted among the civilized countries of the world.

The Group editors, reporters and hosts believe that the truth, no matter how bitter, is always in the best interest of Pakistan than a lie, no matter how sweet.

The April 19 transmission, immediately after the attack on Hamid Mir, included content that was excessive, distressful and emotional for which Geo has apologized to all concerned. Regardless of this apology attacks still continue against the group, including physical attacks and harassment of reporters and editors as well as burning of newspaper vans.

The spokesperson said the only fault of the Jang/Geo group was that it was unwilling to allow its editorial policy to be dictated.

For hurt caused as well as for the sake of the lives of its tens of thousands of journalists and employees who are receiving daily threats, Jang/Geo TV network even went to the extent of offering an apology but it failed to calm the nerves of the powerful.

The spokesperson said it seemed that the government had finally surrendered in the face of tremendous pressure from unseen forces. It was only yesterday that Geo had served a lega notice to claim around US $50 million from the federal government, Pemra and ISI in terms of reputational damage as well as the actual damage caused to the group as their formal complaint included blaming Geo to “historically pursue an anti Pakistan agenda”.

The spokesman said it seemed that it was the legal notice to the Defense Ministry, Pemra and ISI that compelled the government to rush to deliver the final blow to Geo News. The head of Pemra was appointed only hours before Friday’s decision to suspend Geo News. The pressure, it seems was so great that Pemra went through with the decision even without giving the right of hearing to Geo News.

Clarifying the so-called contradiction between Geo News apology and its legal notice, the spokesman said that its apology and even Pemra’s yesterday’s decision was about Geo news transmission of 19 April. The group still stood by its apology. The basis of the legal notice was the unsubstantiated allegation that the Group has a history of pursuing Anti-Pakistan agenda. This was the worst kind of defamation. This allegation has caused huge actual and reputational loss to the Group and it exposed thousands of Group employees to life threats.

A section of the media has been instigating not only violence against Geo and its employees but also lobbying powerful forces not to accept Geo’s apology. They are doing this for financial gain as Geo Network has the largest advertising share because of its huge viewership and competitors thought they would stand to gain millions if Geo was shutdown. The Group has the largest circulated newspapers, news channels and entertainment channels as well as Pakistan’s only sports channel. In fact Geo News following is bigger than the next three channels combined.

On June 6, 2014, around 10 pm, Geo News shut down its transmission across Pakistan, asking its viewers to pray for justice.The channel will, however, consider all legal options with its editors and legal advisers.