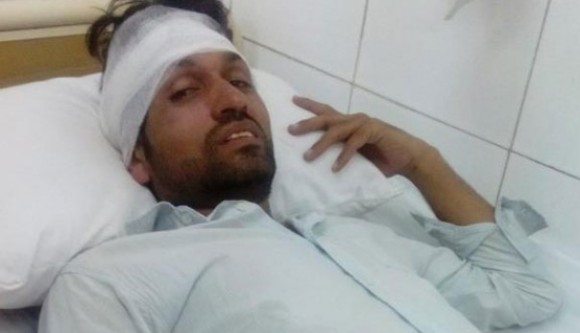 Khan said police beat him with clubs outside the parliament building and accused the media of stirring up the protests. He was returning to the Express Tribune newspaper offices after covering marches by opposition parties calling for the government of Prime Minister Nawaz Sharif to resign.

Three people were killed in the weekend clashes. Pakistan Press Foundation said it has received reports of at least 28 journalists injured, some by police who also allegedly attacked their vehicles, while reporting on the security forces teargassing and shelling protestors.

Islamabad police did not return calls or emails requesting comment.

Medics at Polyclinic Hospital treated Khan for head injuries. He was transferred to a private clinic after authorities ordered the arrest of any protestors with minor injuries at the hospital, according to the Express Tribune.

Pakistan has been in turmoil since mid-August when tens of thousands of protesters led by Imran Khan, a famous former cricket player, and cleric Tahir ul-Qadri flooded into the capital Islamabad, accusing the government of corruption and election fraud. Violence escalated over the weekend, stoking fears of army intervention in the coup-prone nation.