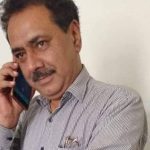 Shaukat Korai, court reporter of News One TV channel   was assaulted in the premises of Sindh High Court (SHC) by Counter Terrorism Department (CTD) officers in Karachi on April 27.

The journalist started making footage of those suspects whose heads were covered with a black veil. One of the CTD officer came to him and asked the journalist to delete the footage and said you are not allowed to make this footage.

The journalist has submitted an application regarding the incident to the SHC Chief Justice Ahmed Ali Shaikh, who has called the DIG CTD, Abdullah Shaikh and the officers to report on the incident.

G.M. Jamali, the President of Pakistan Federal Union of Journalists (PFUJ) has expressed deep concern over the violent attack on Korai and urged the authorities to immediately investigate the matter.