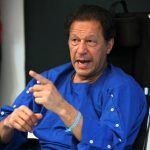 Pakistan Press Foundation (PPF) strongly condemned former prime minister Imran Khan has implicated three journalists — Hamid Mir, Waqar Satti and Murtaza Solangi — to being linked to the attempted assassination attempt on him in Wazirabad in the Punjab province. Such irresponsible claims are not only defamatory but dangerous.

On November 3, a gun attack on PTI’s long march at Wazirabad’s Allah Wallah Chowk in the Punjab province had left seven injured and one killed. The attack was seen as an assassination attempt on the former prime minister.

In an address on November 6, Khan said that following the incident, before the criminal complaint or First Information Report (FIR) was even registered, some people had started issuing statements that he had committed blasphemy.

“The people who are affiliated with other parties, they instantly start tweeting. Right now there is no investigation and they all say an extremist has done it.”

He then mentioned the timings of tweets by Waqar Satti, Murtaza Solangi, Hamid Mir and by Geo News and Samaa News.

Appearing in an interview with CNN’s Becky Anderson, Khan named Waqar Satti, who he labeled as being “linked with these agencies”, as having made a video in which the journalist stated that Khan had offended religious sentiments.

On November 8, the Rawalpindi Islamabad Union of Journalists (RIUJ) expressed “grave concern” over Khan’s attempt to implicate the journalists. In a statement shared by The News, RIUJ President Abid Abbasi and General Secretary Tariq Virk said: “Imran Khan should not level such charges against journalists which are an attack on freedom of the press.”

As per the report, the media had carried a statement of the accused in the gun attack as they received it and Khan’s objection to this was “unjustified”. “If they had carried the statement of a fake accused or his remarks had been twisted, then Imran Khan was justified to criticize them. However, if the allegations continue, the union has the right to initiate legal action to protect its members,” the statement added.

The Council of Pakistan Newspaper Editors (CPNE) also expressed their extreme concern over political parties and their leaders’ defaming of media organizations and journalists for their own political objectives.

CPNE President Kazim Khan said that in the race for news, every real journalist believes that breaking the news first is a matter of honor. In the Wazirabad incident, journalists such as Hamid Mir had shared news after confirming it with their sources. CPNE leadership said that connecting with some conspiracy or nexus was wrong and they strongly condemned it.

While an investigation into the gun attack during Khan’s rally in Wazirabad must be conducted, the decision of the former prime minister to implicate certain journalists for being somehow involved is not only defamatory but alarming. As the leader of the Pakistan Tehreek i Insaf party and the former premier of Pakistan, Khan’s statements and such accusations carry weight amongst his supporters.

Making such allegations against senior journalists is irresponsible and can be a source of further abuse or attacks against them. We urge the former prime minister to present evidence to back up such accusations or to avoid making such remarks till investigations are complete.