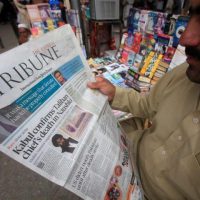 ISLAMABAD: The Pakistan Muslim League-Nawaz-led government has prepared a draft law to control media and impose more restrictions on the freedom of press. The speed with which the law is being prepared has sent alarm bells ringing in the journalist community, including the All Pakistan Newspapers Society (APNS) and Council of Pakistan Newspaper Editors (CPNE). The two representative bodies have been accusing the government of not taking them into confidence.

The two organisations warned the government if it tried to get the draft law passed then journalists would hold protest demonstrations, stage sit-ins and fast unto death.

There are reports that this important piece of legislation that would directly impact newspapers and the print media could be presented during the Press Council’s meeting to be held on Monday. The legislation would be called the Pakistan Print Media Regulatory Authority (PPMRA) Ordinance 2017.

In the proposed law, it was suggested to disband the Press Council. The forum is being used to hear complaints lodged by the journalist community. It would be replaced with the Pakistan Media Regulatory Authority. Its jurisdiction will span all over the country.

According to the proposed measures, the government may suspend publication for 16 days, close offices, impose Rs1 million fine and order imprisonment of up to six months.

Instead of issuing them declarations, newspapers will be given publication licences which would be renewed each year. For this , he decision of the authority, to be composed of a chairman and 12 members, would be deemed final.

Of the 12 members, four would come from the journalist community while the rest would be nominated by the government.

The authority would nominate a registrar that would exercise powers, including annulment of the declaration of a newspaper, or suspend it. In addition, other stringent measures proposed in the law include inspection of the press and newspaper offices.

The proposed ordinance after its likely approval by the Press Council next week would be presented in parliament and become law after the president’s assent.

The News International: No law against press freedom to be enacted: PCP