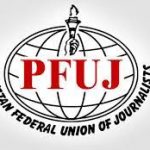 Appearing on a television show the information minister had also said that “condemnation of attack on journalists (by journalists or journalists’ organisations) is an international agenda”.

The PFUJ took strong exception to, what it termed, “an irresponsible” statement by a federal minister.

In a joint statement issued on Wednesday, PFUJ President Shahzada Zulfikar and Secretary General Nasir Zaidi expressed serious concern over such a statement and said the minister’s comments are apparently aimed at diverting attention of national and global organizations that monitor press freedom and human rights situation in Pakistan.

The two PFUJ leaders noted that such statements are further widening the gulf between the government and media in the country.

“This is a dangerous trend and bringing bad name for the country,” the PFUJ statement said.

The PFUJ leadership said that instead of taking shelter behind such “statements”, the information minister and PTI government should take measures for arresting criminals who are involved in crime against journalists and media workers.

“Such ill-conceived statements cannot be expected from an information minister who himself had been part of media as an anchor,” the journalists’ leaders said. The PFUJ reiterated that it would continue to raise its voice for all those journalists who are coerced, threatened or attacked by any state or non-state actor and continue to fight for the freedom of expression in the country.