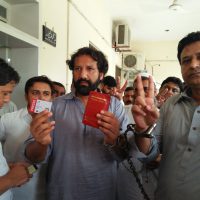 Kadafi Zaman, correspondent of Norwegian TV2 channel was beaten up and arrested on Friday, July 13, 2018, in Kotla, in the province of Punjab while covering a protest demonstration. He was held for three days before being released on bail on July 16.

The journalist was covering a protest rally ostensibly called to welcome Nawaz Sharif and his daughter Maryam Nawaz, both leaders of Pakistan Muslim League Nawaz (PML-N) as they returned to the country from Britain to face years of jail after being convicted on corruption charges.

In the charged political atmosphere leading up to the general elections on July 25, the caretaker government instituted measures to prevent supporters of Sharif from reaching Lahore, the capital city of Punjab, were a massive rally was planned by PML-N.

In implanting the government decision, police took actions that led to violent confrontations in a number of cities and towns including Kotla, where Zaman was reporting for TV2. His coverage on social media showed police resorting to baton charge and firing in the air to disperse the rallies. He was subsequently arrested along with several protesters and held at Kakrali Police Station in Gujrat District.  Although he has been released on bail, charges against him have not been dropped.  Eight criminal charges have been filed against Zaman including attempted murder, assault and disturbing the peace.

According to Norwegian wire service NTB, Karianne Solbrække News Editor of TV2 said Zaman was trying to report the confrontation between police and protestors when he was arrested.

Talking to PPF, Malik Ansar, Chairman of the Kotla Press Club condemned the arrest and said that there needs to be effective mechanisms so that journalists are provided protection while covering the activities. 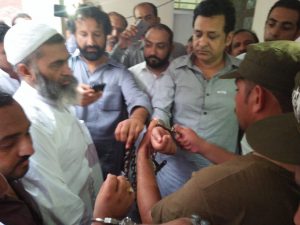 PPF has called on the authorities to immediately drop all charges against Zaman.  In letters to the Pakistan Prime Minister Nasirul Mulk, Chief Election Commissioner Justice Retired Sardar Muhammad Raza and Chef Minister of Punjab Hassan Askari Rizvi, PPF said such actions against the media will adversely affect the perception of unhindered media coverage of election activities and issues.

PPF reminded the government that the legally binding ECP guidelines obligate state authorities to make special efforts to investigate all acts of violence, intimidation or harassment directed against media personnel and to bring those responsible to justice, particularly where the act was motivated by an intent to interfere with media freedom.