Home » Featured » Noorani faces another attack: this time on character 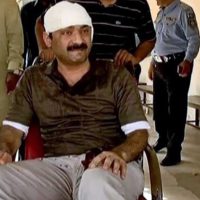 ISLAMABAD: Ahmad Noorani has been targeted again within five days. While he was physically attacked late Friday that left him with serious head injuries, the latest attempt made on Tuesday was aimed at his character to damage his reputation.

Although, attackers of the first incident still remain unknown, the ones who maligned him through defamatory information aren’t only known, they are from within the media community. A little-known newspaper carried a story targeting this bedridden investigative journalist of The News with baseless allegations.

Islamabad Police, the story claimed, are investigating Ahmad Noorani’s alleged affairs with an unknown girl, a university student, whose male classmates attacked in reaction. Khalid Awan, SHO Aabpara, has been quoted in this fabricated newspaper report as confirming the authenticity of this information.

As The News approached the SHO Aabpara for comments, he outright rubbished the contents of the report and said he protested with the newspaper which not only discredited the injured journalist but the police officer as well. I asked the reporter about the source of information that he refused to share, the SHO Aabpara said with reference to his conversation with the journalist who quoted him in the story.

Zubair Sheikh, SP (City), also rejected the contents of the story. They (the newspaper) should at least share with us the name of the girl bracketed with Ahmad Noorani, even if they can’t divulge the source, he said, adding neither there was any information of this nature nor under police investigation.

The report was made viral right early in the morning on social media since the newspaper carried it is unheard of to majority of Pakistanis, let alone buying its copy. Anchors and analysts of certain background started promoting it through their twitter handles and Facebook pages along with other dubious accounts.

Ahmad Noorani woke up on Tuesday morning to receive a flurry of calls and found himself in an awkward situation explaining his position. Hardly anybody knows him more than his colleagues. There is no iota of truth in the allegations leveled against him.

But he is not the first victim journalist to face it. Such a defamation campaign was launched against every journalist attacked by unknown assailants. Baseless allegations were also leveled after my abduction in September 2010. Rumormongers went on claiming that a certain unnamed girl would hold a press conference soon which is still awaited even after seven years.

Another “source information” spread through senior journalists suggested that I had staged the abduction drama for getting the Canadian immigration. As a matter of fact, I have never been to Canada either before or after the incident. Similar nature of allegations were faced by Azaz Syed after firing by unknown assailants at his house.

Slain journalist Saleem Shehzad was also subjected to character assassination after his physical assassination. In addition to alleged affairs, baseless stories were in circulation about his links with the foreign agencies. Geo TV anchor, Hamid Mir, came under rumor attack. Allegations leveled against him ranged from illicit affairs to settlement abroad.

The rumor mills also concocted stories of the secret marriages and affairs of Mir Shakil-ur-Rahman, Editor-in-Chief of the Jang Group, in addition to getting funding from India. It’s more than 10 years now but nothing has been produced by “unknown” sources of information to substantiate their claims.