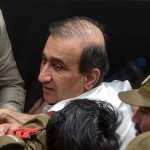 The respected thinker and activist has lent his support to a statement callingfor the fair treatment of the senior-most journalist of Pakistan’s largest media group and condemning the arbitrary nature of his arrest and more than month-long detention.

“The arrest of Mir Shakil-ur-Rahman, the editor-in-chief of the Jang/Geo media group in Pakistan has taken place without a free trial or a conviction against him,” says the petition.

“Not only has the trial not begun, but no charges have even been framed against him. Yet he has been in a lockup now for over a month practically in solitary confinement,” the petition adds.

“Under international law, if a prisoner spends more than 22 hours alone in prison without meaningful human interaction it is considered solitary confinement, the psychological and health damage of which can be permanent,” the petition highlights.

“Rahman has been cooperating with the authorities about the case which is related to a 34-year old property transaction between two private parties. He presented himself before the investigators, flying in from outside the country,” the petition notes.

“There is no reason to not release him from jail, particularly at a time when the global coronavirus pandemic is leading governments to set free non-violent prisoners with no criminal record, particularly if they are elderly and have health issues as Rahman does,” it adds.

“Let the case continue against him if there is merit. Let him be arrested if he is found guilty after a trial. This is what fundamental rights are about. This is what an elected government that claims to be democratic should ensure,” the petition urges.On March 12, Mir Shakil-ur-Rahman had been arrested over a 34-year-old property transaction by NAB. Despite presenting evidence of the transaction, MSR was arrested by the accountability body in violation of court orders. The court subsequently denied him bail, extending his juridical remand.

Various international organisations, including Reporters without Borders, Committee to Protest Journalists, BBC, The New York Times, the US State Department, as well as politicians across the world, have condemned the illegal detention of Mir Shakil-ur-Rahman.

Senior politicians from across the spectrum, journalists from major media outlets and other notables spoken out in in favour of the veteran journalist, who, local and international watchdogs have said, is being victimised for speaking truth to power.

Celebrity barrister Amal Clooney’s law firm, Doughty Street Chambers, has also filed a complaint at the United Nations (UN) against the “politically-motivated and arbitrary arrest” of MSR by the National Accountability Bureau.

Noam Chomsky, is an American theoretical linguist whose work has revolutionized the field of linguistics and biologically based cognitive capacities. He had made tremendous contributions to linguistics, cognitive psychology and the philosophies of mind and language.

Chomsky has, through the course of his career, helped to initiate and sustain what came to be known as the “cognitive revolution.”

In recent years, Chomsky has gained a worldwide following as a political dissident for his analyses of the pernicious influence of economic elites on US domestic politics, foreign policy, and intellectual culture.

Chomsky has been widely hailed all over the world for taking principled stances on the occupations of Palestine and Kashmir. He has also often compared the rights violations in occupied Kashmir to the atrocities committed by occupying Israeli troops in Palestine.

Chomsky has also advocated that Indian army should move out of the Kashmir. “Indian Army should leave Kashmir. Kashmir has had an awful story, especially since late 80’s after that fake election, and there have been horrible atrocities there,” Chomsky said in a conversation with a journalist in the summer of 2015.