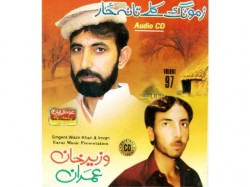 PESHAWAR: In a small cramped apartment in Kabadi bazaar Peshawar, 17 singers have been living a tough life for the last seven years. This bazaar is famous for recording and selling audio albums for avid music buffs of K-P.

One of them is Wazir Khan Afridi, a renowned singer of the Khyber Agency, who has to his credit more than 40 audio and video albums. But now, this 40 year old singer is in dire straits since getting displaced from Barra. “I have been abducted three times from Peshawar and each time I am freed on the condition that I will not sing anymore,” said Wazir. “I can’t give up this profession. Singing has taken up my whole life.”

Singers from the tribal areas of Khyber-Pakhtunkhwa are languishing in different cities of the province in search of jobs as they are unable to continue their profession due to fear and lack of listeners.
Though exact numbers are not available, it is estimated that hundreds of people associated with the performing arts in cities and different IDP camps of K-P feel lost. Federal Minister for Information Pervaiz Rasheed has recently said that the government is working on devising a strategy to help out the displaced artists of K-P and Federally Administered Tribal Areas (FATA). However, these singers were of the view that during the last seven years, neither the government nor any non-governmental organization has helped them.

Due to a lack of demand of audio albums and limitations on music industry, all centres in Peshawar have stopped hiring artistes and recording their work. Musical concerts have stopped due to bad law and order situation. The artistes say that it was the concerts where they got appreciation as well as financial benefits. They are sporadically invited by a few private radio and TV channels.

The singers nostalgically recall better times when there were a decent number of audio and video production houses in Barra, Khyber agency. “I remember there were 16 huge musical recording and distribution centres just in Barra,” said Hanif Afridi, another singer, who got popularity after his song ‘Khyber pa weno rung de, Pekhawar pa weno rung de’. Afridi has released 10 of his audio albums. He is now working as a cab driver in Peshawar.

This area in the past has produced a number of artistes including ghazal singer Khayal Muhammad. Another great voice of the area was the late Rafique Shinwari who gained popularity by rendering ghazals of famous Pashtun poet Ameer Hamza Baba. New singers who are leading the Pashto music industry currently are Anwar Khyal, Hashmat Sahar, Sarfaraz Khan and Zafar Iqrar. They all hail from Khyber Agency.
“Now one can’t even dream of those times making a comeback when the singers would be at freedom to perform anywhere in Agency or in settled districts,” said a disgruntled Afridi.

He said that ironically, their music is secretly heard even by those who forbid the artistes to perform. He said that there are hundreds of artistes who are now working as labourers in different cities including Karachi, and the condition of poets who penned songs for them are facing the same predicament.
“Every person in our agency is a born artist who wants to perform, but their creativity has been stifled due to threats to their lives,” said Afridi.