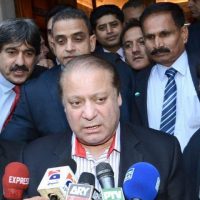 The country, he said, was facing the worst form of dictatorship.

According to him, he was personally facing the same situation confronted by a protest movement and media organisations.
Nawaz Sharif said that efforts were being made to ensure that the accountability court convicted him in NAB references, adding that the reason was simple enough: Five judges of the Supreme Court want to save themselves from embarrassment.

Alluding to a virtual ban on a television channel and contempt notices against several of his colleagues, Nawaz said: “This is nothing less than a judicial martial law.”

“In my entire political career, I never witnessed such (blatant) restrictions on media (outlets) and freedom of expression,” he maintained.

“The Pashtun Tahaffuz Movement’s (PTM) rally should have faced no hurdles … It was wrong to stop them from staging a rally … It is their (democratic) right,” he said.

He said that all proponents of such anti-democratic actions should be held accountable as the country did not belong to any single individual. “Pakistan belongs to 22 million people.”

Nawaz and daughter Maryam arrived on Monday from London to attend the proceedings of the accountability court.

Addressing media persons inside the premises of the accountability court, Nawaz said that the top judge was free to do as he pleased, but barred everyone else from voicing their opinions.

Criticising recent judgments, Nawaz stated that they were illogical and had no mass appeal. “He (the CJP) can enquire about the rates of potatoes and tomatoes, fares of public buses, the state of hospitals and prices of medicines, but he must really focus on scores of pending cases.” he said.

“Verdicts in pending cases are more important … The CJP must count pending cases in subordinate courts,” the former PM said. “He must visit orphans whose cases have been pending in courts for years. It does not suit him to summon the chief minister and make him stand in line only to pass derogatory comments,” he said.

“This isn’t your job,” the PML-N leader said. Nawaz said the parliament had no power and lacked will. “The next parliament will have the guts to do something and take a stand,” he said.

He believed that nobody had accepted judgments against him, even petitioners, including Imran Khan, and prominent lawyers termed the decision weak.

Referring to his disqualification, the former prime minister wondered how “they (the judges) will answer to history … Current judgments are weaker than those penned by Justice Munir.”

Commenting on the remarks of the Jamaat-e-Islami (JI) chief on Senate elections, he said: “We share similar views. We also believe that Imran … must be reprimanded for casting his (party’s) votes indirectly for the Pakistan Peoples Party (PPP) (candidates),” he said.

“How can they usher in change when they are making compromises on principles?” Nawaz asked.

Criticising the nature of proceedings against him, he said that apart from current NAB references “a former prime minister is now facing charges of ordering extending a road”.

“Is this how they reward a three-time PM?” Nawaz questioned, pointing at the Jati Umra road extension case.