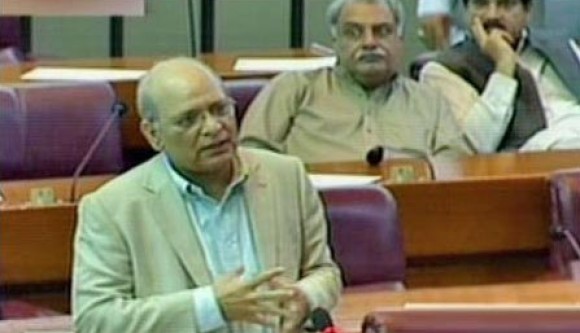 ISLAMABAD: Senator Mushahiddulah of the Pakistan Muslim League-Nawaz (PML-N), while speaking to the joint sitting of parliament on Thursday, said that no institution had committed any mistake but the country had been pushed to the verge of collapse.

He said that the sit-ins of the PTI and PAT had inflicted huge losses on the country.He said that the government would not allow anyone to crush Geo and the Jang Group as the illegal closure of Geo and the continuation of attacks on the offices of Geo TV echoed in the joint sitting of both the houses of parliament.

Senator Mushahidullah Khan said that Mehmood Ghaznavi had not attacked the temple of Somnath as many times as the Geo offices had been attacked in recent days.“What Imran Khan is today it is just because of Geo, which painted him as a hero,” he said.

Senator Mushahidullah said Geo would rise again and the powers that be would also see its rise.He said, “Geo and the Jang group are the biggest media group of the country and have been rendering services for Pakistan for the last 70 years. All the institutions have committed mistakes but this did not mean that mistakes should never be pardoned. If anyone commits mistakes, they could be challenged through legal and constitutional means not through the use of force.”

Senator Mushahidullah Khan said that parliament had to play its role in support of Geo as it was not only an issue of Geo but also a national issue. ‘The offices of Geo are being stoned on a daily basis, the vehicles and newspapers of the Jang group are being burnt. We will not allow anyone to use force if anyone has made a mistake,” he added.

He said institutions should resolve those issues that were tasked to them. He said he was critical of Geo, as what Imran Khan was today was due to Geo which gave him wide coverage in the past.He said that the government would not allow anyone to crush Geo and the Jang Group.

He said issues could be resolved if every institution performed its duty. Senator Mushahidullah said that the sit-ins had inflicted $1 billion loss to the country. He said that the PAT chief had come to Pakistan as part of a great game. He said that Imran Khan and Dr Tahirul Qadri were following a secret agenda. After becoming part of a great game being followed in the world, they had succeeded in getting the Chinese president’s visit to Pakistan postponed.

He paid rich tributes to the people of Pakistan as they did not become part of the civil disobedience movement launched by Imran Khan.The PML-N Senator said that the abusive language used during the 34-day sit-ins had not been used in the 68-year history of the country.

He also paid homage to the opposition parties for siding with the government in saving democracy and the Constitution.He said that rigging and Model Town tragedy were not part of their agenda. He said Dr Qadri came to the federal capital in 2012 but he returned after minting a lot of money.

Senator Mushahidullah expressed his belief that conspiracies against democracy and parliament will die down and the so-called champions of revolution and independence will have to bite the dust.“Imran Khan and Dr Tahirul Qadri are carrying forward the hidden agenda of their foreign masters to ruin the country’s economy and are misguiding innocent people in the name of a ‘new Pakistan’ and a revolution,” he said.

Senator Mushahidullah Khan said the entire parliament is united for its supremacy and democracy despite all of political differences and it is a clear message for all those conspiring against parliament and democracy.He said despite the fact that dictators hanged or killed political leaders, they remained alive in the form of their followers and parties. “But dictators have been forgotten long ago,” he said.

He said today once again conspiracies are being hatched against parliament and democracy openly or secretly. “But the conspirators must know that they will fail. No one will be allowed to cast an evil eye on parliament and it will stay intact and continue to function,” he added.

He said, “Sit-ins and protests are an eyewash as there is a hidden agenda of these two leaders who have mistaken parliament for a cricket ground.”

The senator said if every institution of the country starts working within their constitutional jurisdiction, there will be no problem in the country. If columnists start politicking and politicians start writing articles and if other institutions start conspiring against democracy, it will worsen the situation, he said.

He said these so-called leaders should learn a lesson from history and understand that whenever any force conspired against democracy, parliament and politicians survived.

He alleged that Dr Qadri is inciting innocent people in the name of Model Town killing. “But I say that whenever a genuine investigation of that incident is held, Qadri himself will be found involved in the incident because it was part of the plan to derail democracy.”

He said, “People have rejected the demands of Imran Khan regarding non-payment of bills, civil disobedience and submission of remittances through Hundi and for this we salute Pakistanis living within the country and abroad.”

Mushahid said both Imran Khan and Tahirul Qadri have received money for all this drama from their foreign masters and its plan was chalked out at secret meetings within the country and abroad.

He also objected to the language used at the sit-in and asked what message they are sending to the youth of this country. They are victims of their ambitions and are least bothered that they have caused billions of losses to the national economy.

He said their focus was to ruin the economy and hamper the visit of Chinese president wherein the agreements of billions of dollars were to be signed, he added.He said the political leadership deserves appreciation for showing unity for the sanctity and dignity of the parliament.

While expressing resentment over lingering and result-less negotiations among Pakistan Tehreek-e-Insaaf (PTI), Pakistan Awami Tehreek (PAT) and the government, Senator Saleh Shah said a tribal jirga could resolve the issue within a week.

Senator Shah said the issue of sit-ins should be resolved as soon as possible as country’s leadership and democracy were being disgraced by Imran Khan and Tahirul Qadri.

Lauding patience and political acumen of Prime Minister Muhammad Nawaz Sharif and opposition to deal with sit-ins, he said all parties were unanimous to protect democracy and constitution.

Criticising PTI chairman Imran Khan for using derogatory language against political leaderships of the country, he said dirty talk must be avoided. “Government must take care of internally displaced persons (IDPs),” he said.

Abdul Rahim Mandokhel of Pakhtunkhwa Milli Awami Party (PkMAP) said the nation and political parties were united for protecting the constitution of the country. He said the parliament being the supreme body will protect the constitution as well as the rights of the people.

He rejected allegations of rigging in 2013 general elections and said the demands of those staging sit-ins for resignation of prime minister are not democratic and constitutional.

He said the army should not be dragged into politics as it has no links with the current political turmoil.

Rashid Godail of the MQM called for early resolution of current crisis saying it is adversely affecting the economy.He said Pakistan Army is engaged in war against terrorism and we should all stand behind it. He said more provinces should be created and local bodies system enforced for bringing prosperity in the lives of the people.

Ayaz Soomro of the PPP said attacks on the national institutions amount to attack on the whole nation.He said those having contradiction in the words and deeds cannot be the leaders of the poor people.

He said the conspiracies of protesting leaders against the constitution and the system stand exposed before the nation. He said PTI and PAT will get nothing from the sit-ins except failure and disappointment. He said negotiations should be continued with the two parties for amicable solution of the matter.

Disgruntled legislator of the PTI Nasir Khan Khattak said the House should pass a resolution to condemn those elements whose acts led to the postponement of the Chinese president’s visit. He said today China and India are writing a new chapter in their relations while Pakistan appears to be standing alone in the world.

He said the parliament should send a message through resolution that Pakistan values its relations with its old and time tested friend China and looks forward for the visit of the Chinese President.

During the debate, the parliamentarians continued expressing their support to Prime Minister Nawaz Sharif and dubbed Imran Khan and Dr Qadri conspirators against democracy.

Senator Saleh Shah criticised Imran for using derogatory language against the political leaderships of the country.He said “dirty talk” must be avoided. “Perhaps Imran wants to introduce a new leadership in his new Pakistan by discrediting the existing leadership,” he added.

Ayaz Soomro of the PPP said parliament stands with Prime Minister Nawaz and will not allow anyone to seek the resignations of the prime minister.Rasheed Godil of the MQM asked MPs to listen to what the dharna stagers were saying and to resolve the issue.