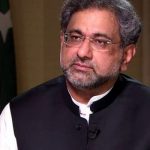 ISLAMABAD: Former prime minister Shahid Khaqan Abbasi and other parliamentarians from both sides of the National Assembly Friday raised the issue of the arrest of Mir Shakil-ur-Rahman, terming it an attack on freedom of the media and a violation of the Islamabad High Court’s orders.

Speaking on a point of order, the senior PML-N leader said instead of uniting the nation on serious issues like coronavirus, the editor-in-chief of the largest media group was arrested by the NAB. “At a time when the country is preparing to fight against coronavirus, a new issue of arrest of Mir Shakil-ur-Rahman has been created,” he said, adding that the Islamabad High Court (IHC) had given clear directives one week back as to why, when and how an accused could be arrested by the NAB. He regretted that the ink of the verdict had not dried up and it was violated by arresting Mir Shakil-ur-Rahman.

Abbasi said the whole country is worried about human rights in the country and everyone is questioning whether the NAB is an institution of victimisation and whosoever speaks against it is sent behind the bars. “These issues are not separate and linked with each other,” he said, adding that the government would have to look whether it is going to fight coronavirus or it is to suppress the voice of media. “You need to unite the country and end political victimisation,” he said.

Raja Pervaiz Ashraf said unrest has been created in the country by the NAB action. He said Mir Shakil-ur-Rahman was arrested when he visited the NAB to respond to a complaint against him. “The NAB should arrest culprits but not for the sake of their disgrace,” he said.

The former prime minister said people should be told reasons as to why a situation of unrest has been created in the country by arresting a top media personality of the country. Pointing towards empty press galleries, he said the journalists community is under protest against Mir Shakil-ur-Rahman’s arrest.

PML-N Secretary General Ahsan Iqbal, while condemning the arrest, said the government instead of fighting coronavirus has started a fight against the media. “In violation of a decision of the Islamabad High Court, the head of the largest media organization has been arrested without any evidence,” he said.

MQM parliamentarian Syed Aminul Haq expressed concerns over the arrest, terming the action an attack on democracy and freedom of expression. “It was the blackest day in the history of the country when Mir Shakil-ur-Rahman was arrested,” he said. He pointed out that Mir Shakil-ur-Rahman was arrested in a 34 years old case, which is highly condemnable. “I will request the prime minister to take notice of NAB actions which are creating doubts about its credibility,” he said. Ali Wazir from the former Fata condemned the arrest, asking the NAB to stop political victimisation and pressure tactics against the media.