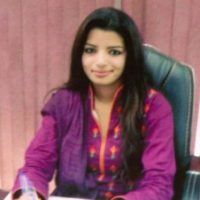 Zeenat Shahzadi, the journalist who went missing in Lahore in 2015, has been recovered by security forces, officials said on Friday.

Retired Justice Javed Iqbal, head of the missing persons commission, confirmed Shahzadi’s return while speaking to BBC Urdu. She was recovered on Wednesday night from near the Pak-Afghan border, Iqbal said.

The newly appointed National Accountability Bureau chief said that some non-state actors and enemy agencies had kidnapped her and she was recovered from them, adding that tribal elders in Balochistan and Khyber Pakhtunkhwa played an important role in her recovery.

Shahzadi’s family has yet to issue a statement.

Shahzadi, who raised her voice for disappearance of victims, went missing in August 2015 while on the trail of an Indian citizen Hamid Ansari reported to have been caught by Pakistani agencies. She had filed an application with the Supreme Court’s Human Rights Cell on behalf of Fauzia Ansari, Hamid’s mother.

According to one version, Hamid was pursuing a Pakistani woman whom he had befriended on the Internet.

The application was accepted and forwarded to the Commission of Inquiry on Enforced Disappearances.

A few months later, news surfaced in a section of the media, saying that Hamid had been sentenced to three years’ imprisonment on charges of espionage. According to some rights campaigners, Hamid has served his sentence and ought to be set free now.

Human rights activist Hina Jillani, in a 2016 interview with BBC Urdu, alleged that Shahzadi had once told her family that she had been “forcibly taken away by security agencies”, detained for four hours and questioned about Hamid.

The disappearance of Shahzadi hit headlines once again in 2016 when her brother, Saddam Hussain, committed suicide in March that year. His elder brother, Salman, had told Dawn that the teenage boy was emotionally attached to his missing sister and very much disturbed by her mysterious disappearance.