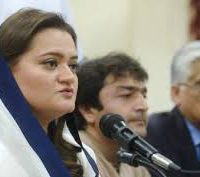 RAWALPINDI: Information Minister Marriyum Aurangzeb on Wednesday promised to take action against the officials who came up with the draft of an anti-press law, even if it meant losing her ministry.

“An inquiry had been ordered against officials who tried to pit government against the media, and they will be punished accordingly after the report comes out. The report will be made public within three days,” she told media workers at the Rawalpindi Press Club.

The draft of the Pakistan Print Media Regulatory Authority (PPMRA) Ordinance 2017, that attempted to regulate the print media by making it mandatory for newspapers to seek annual renewal of their licenses, had recently made headlines.

But it also caused unrest among media, civil society and political parties, who termed it an attempt to control newspapers.

Following the criticism, the information ministry suspended three officials for drafting the law and dropped it from the agenda of the Press Council of Pakistan’s (PCP) meeting on Sept 11.

Addressing the convention, the minister said the PML-N government would not harm press freedom in any way, since it believed in protecting journalists’ rights regarding access to information and protection from persecution.

“The media has always played a role in defending democracy whenever it was attacked. The role of media in war against terrorism is also appreciable,” she said.

The minister said that PML-N leader Nawaz Sharif strongly believed in the freedom of expression and it was in this regard that the PML-N government had created bills for the protection of journalists and access to information.

“The access to information act and the journalists’ security bill will be soon presented in parliament,” she said, adding that the government was taking measures to provide a secure working environment to journalists.

On the other hand, the minister told the journalists to concentrate on “fact-based reporting”, extolling them to appreciate the good work of the government.

She said that journalists’ training was necessary, since they could educate the people through TV and print media.

Talking about political issues, the minister said the country could not go down the path to development and prosperity when a popularly-elected prime minister was ousted from office in an indecent and hasty manner.

“The sanctity of the ballot should be ensured for democracy to flourish,” she said.

She said Nawaz Sharif was committed to rooting out the menace of terrorism from the country, but was sacked for a crime he never committed.

She was of view that former information minister Pervaiz Rashid did a lot for journalists in securing the wage board award.

Pakistan Federal Union of Journalists (PFUJ) President Afzal Butt said that journalists would not tolerate any sanctions on the media.

“Journalists have sacrificed a lot for the freedom of expression and will not accept any dictation on how to present the facts to the people,” he said.

He said the minister’s assurance was accepted by the journalist community, who would wait for the inquiry report.