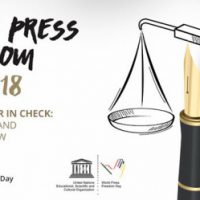 MIRPUR (AJK) – The World Press Freedom Day was commemorated across Azad Jammu Kashmir on Thursday with the unanimous demand for the grant of complete freedom to the press around the globe.

Special ceremonies were held in various parts of Azad Jammu Kashmir under the auspices of various journalists organisations and press clubs to observe the day which provides an opportunity to the press to recount their outcomes over the previous years.

In Mirpur, major ceremony to observe the day was held in a local hotel here on Thursday. Speakers highlighted its exceptional importance and responsible role in building of a healthy society.

The speakers included senior journalists Sohrab Ahmed Khan, Khawaja Shahid Mahmood, Ali Akhter Salim, Dr. Usman Ghani and Abdul Majeed Chughtai. They emphasized the need of the collective efforts by the international community to ensure the complete freedom of press all over the world particularly in those areas where the voice of freedom was being suppressed.

They said that since press enjoys the status of the fourth and important pillar of a state it was imperative for the governments and the nations to ensure its full freedom for the emergence of better and healthy society.

They observed that it was a matter of grave concern over the recent analytical reports of the world’s journalists forums, Pakistan remained at the 8th number among the nations across the globe this year where journalists were suffering threats during the performance of their professional duties. They demanded of the government to ensure the safety of the lives and properties of the media personnel in the country.

The speakers, however, appreciated that because of the complete free-media policy of the government of Pakistan, the media in the country was today enjoying full freedom as compared to the past. In various past dictatorial regimes, the press had been suffering with various sanctions like censorship, they recalled.

They said that since the press and a nation rise and fall together, freedom of expression was imperative for building of a strong stable and healthy nation.

They criticized the imposition of sanctions on press in certain parts of the world including the Indian-held Jammu & Kashmir state where media was badly suffering the sanctions imposed by the Indian occupation forces including the puppet state government. They pointed out that no foreign journalist from print and electronic media was allowed by the Indian occupation forces to visit and cover the everyday tragic incidents of the killing of the innocent Kashmiris by Indian occupying troops in the bleeding vale of Jammu & Kashmir. The people have stood up particularly over last 19 years for fighting against the unlawful and forcible Indian occupation of their motherland.

Speakers strongly condemned the increased sanctions and restrictions imposed by the Indian occupational forces against the media in the occupied valley, where Kashmiris struggle for freedom is at climax, for past many years. They underlined that India and its stooges in occupied Kashmir were trying to gag media with ulterior motives to snub the voice of freedom struggle by the people in the bleeding valley of occupied Jammu & Kashmir.

They called upon the international human rights and media organisations to take immediate notice of the said sanctions imposed against media by Indian forces in the occupied Jammu Kashmir state and move for getting them lifted without further delay.

The speakers called upon the global organisations of media to take immediate notice of the sanctions imposed on local and foreign media in certain parts of the world including in the Indian-occupied Jammu & Kashmir with the ulterior motives to suppress their voice in order to conceal the true picture of inside of occupied Jammu Kashmir. No day was left without the tragic incident of killing of the innocent Kashmiris by the Indian occupying forces to quell their ongoing movement for freedom of the motherland from the Indian yoke, they said.

The speakers called upon the government of AJK to get ensured the implementation of the 8th wage board award by the owners of the newspapers of the country vis-à-vis the early grant of the stipulated allowance for the AJK-based correspondents and reporters of various national and regional dailies and periodicals since the 7th wage board award also clearly speaks of the regular payment of the stipulated retainer ship allowance to the newspaper correspondents performing duties in the district and tehsil headquarters in Azad Kashmir.

They also demanded the managing of inter-provincial tours of AJK journalists as well as the holding of the journalism training workshops in all ten district headquarters of AJK by the state government to ensure the quality working by the newspaper and news agencies correspondents in AJK.

They paid rich tributes to such journalists who lost their lives during performance of their professional duties in various parts of the world – in their efforts for upholding and maintenance of the decorum of free press.