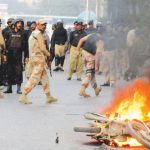 Karachi : An anti-terrorism court judge on Saturday expressed resentment over absence of lawyers from the hearing of two cases against the Muttahida Qaumi Movement-Pakistan leaders.

The cases are related to attacks on media houses on August 22, 2016 after hate speech by the MQM founder.

Farooq Sattar and other accused appeared in the anti-terrorism court on Saturday but the lawyers were absent.

“Are you interested in continuation of proceedings of the case or not?” the judge questioned. “Three years have passed but either the accused or lawyers remain absent (in the hearing), but the court is held responsible for the delay,” the judge said.

The court adjourned the hearing of the case until June 13 due to absence of the lawyers.

The counsels for the accused cross-examined prosecution witness and Judicial Magistrate Kaleemullah at the previous hearing.

Judicial Magistrate Kaleemullah had conducted the identification parade of the accused.

The court has already declared nine accused in the case, including the founder of the MQM, proclaimed offenders.

Farooq Sattar and other accused had pleaded not guilty of attacking media houses and facilitating the hate speech by the party’s founder when the court indicted them in the case in November last year.

Two cases were registered against the accused at Artillery Police Station of Karachi after the party workers attacked media offices in the city.

The workers of the MQM went berserk and attacked the office of ARY News and other media houses on August 22, 2016 evening, after party’s London-based leader’s vitriolic speech against the state agencies and the media. At least one person was killed and a dozen others were wounded in the attack reminiscent of the May 12 assault on a private channel, drawing condemnation along with directives for immediate arrest of culprits from the army chief.

A police mobile van and a motorbike were torched while several other vehicles were damaged amid the wave of violence that turned the Saddar area into a battle ground between law enforcers and protesters. Police said the protesters opened fire besides hurling stones at them and cameramen of three TV channels.