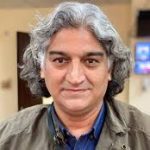 ISLAMABAD: Prominent journalist Matiullah Jan, who was released hours after he was picked up by unidentified armed men from a busy street in the capital last month, requested a parliamentary panel on Wednesday to constitute a committee comprising members of the Standing Committee on Information and Broadcasting from the Senate and the National Assembly to look into issues faced by journalists.

In a meeting of the National Assembly Standing Committee on Information and Broadcasting, which met here with MNA Mian Javed Latif in the chair, IG Operations ICT Police Islamabad briefed the committee regarding progress in Matiullah Jan’s kidnapping case.

He informed the committee that a JIT had been constituted.

The Committee has held two meetings and in one meeting Matiullah Jan was invite to one meeting.

The DIG said that with the help of geo-fencing of the place of occurrence, the NADRA, the CCTV footage and Safe City cameras, the investigation was under process.

He assured the committee that detailed investigation into the matter would be carried out to trace out the whereabouts of each culprit involved in the crime. The committee also asked Matiullah Jan to give his point of view on the incidence.

He said that previously several attempts/attacks had been made on him especially during September 2017 at Dhokri, Islamabad, and the report was still awaited from the ICT Police.

The DIG Operations also requested the committee that all concerned departments relating to this case may be directed to cooperate with the police to help out in the case.