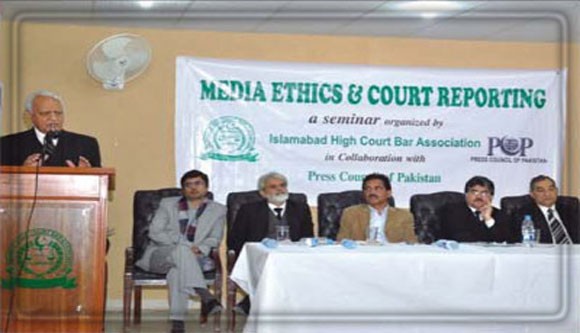 Islamabad: At a seminar on media ethics and court reporting, senior journalists and lawyers agreed that there was urgent need to abide by the professional norms by media, lawyers and other professionals in fulfilment of national imperatives.

Chairman, Press Council of Pakistan, Raja Shafqat Abbasi speaking on the occasion, said that Press and lawyers has played a great role for restoration of judiciary, in strengthening the democracy and rule of law in the country. Court reporters are vital part of judicial system who need extra care and caution. He urged the media persons that while reporting, principles of fairness, accuracy, impartiality, right of privacy and verification should be maintained. He said that sensationalism, encouragement of violence or terrorism should find no place in journalism. He said that credit goes to parliament which reviewed the 73 constitution in its full spirit and framed Article 10-A relating to right of access to information and fair trial. He appreciated the initiative of Pakistan Bar Council in signing MOU with PCP. In case of any threat from any quarter to a media person or Press, the legal fraternity will provide legal assistance to them.

Abbasi said Pakistan can take pride in its free media. “Media has achieved freedom strength and prestige as a result of strenuous efforts and sacrifices”, he observed adding that now was the time to move towards maturity and professional ethics so that media could keep its rise and avoid decline. He said people have right of access to information through media. “This is how institutions become transparent and are subjected to accountability”, he said.

President, Council of Pakistan Newspaper Editors, Chie Editor daily ‘Jinnah’ in his address at the seminar touched on various pressing issues relating to media practices. He focused on media development in historical perspective but lamented that there were some signs of decline also. He stressed the need to stem the tide of decline in media by promoting objectively fairness and balance in reporting. He proposed that as Bar and Bench jointly work for administration of justice, so must do Bar and Media for promoting fair court reporting and cause of justice.

Hanif Khalid, Resident Editor daily Jung, said, media in Pakistan could learn from their counterpart in the advanced countries of the world. He said the lawyers should brief reporters on cases of public interest.

Asad Malik, President Islamabad High Court Press Association said the media has gained more importance in the society in the wake of judicial activism. “It is now for media to highlight cases of national importance being taken up by our superior judiciary without losing professional balance”, he observed.

President, Islamabad High Court Bar Association, Dr Syed Anwar Shah made a brief mention of the media concept of ‘Free Market of Ideas’ and the rival concept based on need for regulated media. He said the first concept was preferable but within the framework of professional ethics. He was sure that Pakistani media would preserve its freedom and mature with the passage of time.